Fortnite Wiki
Register
Don't have an account?
Sign In
Advertisement
in: Epic, Selectable Styles, The Seven,
and 9 more
English

Agent Jones is an Epic Outfit in Fortnite: Battle Royale, that can be unlocked immediately after unlocking the Chapter 2: Season 6 Battle Pass.

It's time to save reality.

I got your six, Looper.

Talk about a gear upgrade.

Good to see you, Looper!

Have you spoken to the Scientist?
Wearing The Origin

Agent John "Jonesy" Jones, or simply Jones and self-claimed The Legend is a former high ranking member of the Imagined Order who worked under the command of Doctor Slone. He betrayed IO during the Zero Crisis Finale in order to save Reality Zero. After having been rescued from prison by The Foundation during The End event, he joined The Seven. He is the original man behind all of Jonesy snapshots.

Jones was first tasked by the Imagined Order to jump into The Zero Point. It creates one of the very first snapshots of him, Bunker Jonesy, along with numerous others throughout his various trips into the Loop. He is sent through the Zero Point to many realities in The Omniverse to bring order to them, kidnapping people and putting them in The Loop so the IO can study them. He was also very knowledgeable about The Seven. As years past, Jones has children and a family that lived in Jones' very dangerous home Reality, under protection by the IO. As they get older, Jones wants to retire so he can spend time ith his grandchildren he barely knows. Doctor Slone reminds that he became indispensable in the IO and if he leaves, his family won't be under protection anymore, forcing Jones to work many more years for descendants he never knew.

Jones walks through The Bridge during The Device, and order his co-workers to change The Storm. While talking, The Looper gets teleported into his office, and listens to him talk. Jones opens the door and sees The Looper, asking them if they can hear him.

Jones is briefly seen at the end of the Devourer of Worlds Event. At first lying on the floor in an unconscious state, he then quickly wakes up as the building crumbles around him.

After the battle against Galactus finishes, the Imagined Order is in a state of panic. John Jones is lying on the ground as the phone on his table rings. He answers the phone, and Doctor Slone, orders him that he needs to reseal the bridge and that the last thing they need is someone escaping The Loop. Just as he walks out of his office, grabbing his Field Pack, Slone warns him about The Seven, but he leaves the office without hearing her. He enters The Bridge and locates the best Hunters across all realties. Through his Reality Logs, he brings several Hunters to The Island so they can create chaos while IO tries to fix The Zero Point. While doing this, he creates Pure Portals which overloads The Zero Point more.

Each reality hop made the Zero Point more unstable. He turns to The Seven and tries to get access to "Restricted File 8752," all files related to the Seven. After multiple failed attempts, he goes onto the island and through a series of events, throws the Portal Device into the Zero Point, gets the help of The Foundation and they reseal the Zero Point. However, he is looped as a result and The Foundation seals himself into The Spire.

Jones was found by the Imagined Order and was taken to The Bridge where he was being tortured by Doctor Slone for betraying them and helping the Seven but was rescued by The Foundation who was revealed to have lived the completion of The Spire. Jones was then given a gun to help hold off the IO Guards. After The Foundation rewires part of The Bridge, Jones then proceeds to activate the flipping of the Island, and at one point drops the gun in The Zero Point.

Jones officially joins The Seven as an ally, but is still disliked by The Scientist and the other members. He stays in the Seven Outposts with Seven Sentry while working on Geno, meanwhile his Snapshots started their own village society as The Joneses.

Jones and other members of The Seven formed The Resistance, with members and loopers from different realities. Jones also recruits Peely to The Resistance as a vehicle driver. He instructs The Looper on giving intel from the IO Airships and instructing Peely how to drive. He is still working on Geno.

Jones, alongside The Foundation, Spider-Man and The Imagined infiltrate The Bridge. While looking for The Zero Point, Jones comes across his old office and picks up a picture of his wife from an old frame. They meet up at the center but are ambushed by Slone and Gunnar. The Foundation is defeated by Gunnar, but the rest of the team escaped to Reality: 616. The team get help from Wolverine and travel to Wakanda, in search of The Zero Shard. They fight against hordes of Hybrids and eventually sit down at a campfire, where Jones reveals his past to the team. The next day, they fight against the High Evolutionary and Stegron. They discover that Doctor Doom has snuck around them and take the Zero Shard first to go to Reality Zero and create and army of Hybrid minions. The High Evolutionary and Stegron join Jones and his team to stop Doctor Doom.

Jones and The Foundation act as the ground forces during this live event. Together they disable the shields protecting The Collider. He checks in on The Paradigm after her mech is critically damaged. He also sends Peely to help repair the mech with a Slurp Truck. After the loopers get caught in the earthquake, he makes sure that nobody is hurt and proceeds to fight with them and the Foundation against IO Guards. He distracts a B.R.U.T.E. whilst The Foundation destroys it by picking up a heavy object and throwing it at its back. Just as they reach Dr. Slone, The Paradigm informs them that the mech's systems are back online, so The Foundation asks Jones to buy them some time. He successfully distracts Slone long enough for the mech to crush her and the tank she was in. After seeing that The Zero Point was focused on Geno, he and the Foundation jumped into it in an attempt to find him. 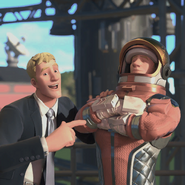 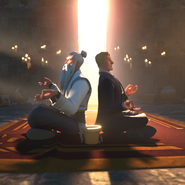 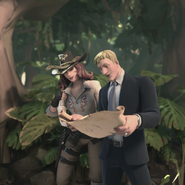 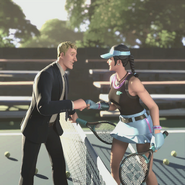