This Page/Section is about an item or concept that has been removed from the game.

The Fortnite Annual Pass 2020 was a leaked prototype that existed in the Fortnite update v11.30 build that was leaked as a result of datamining. The datamining found that Epic Games had an Annual Pass in-mind where players could purchase the annual pass, and will automatically unlock exclusive cosmetics and 25% automatically unlocked of the upcoming battle passes in 2020. It is known that Epic Games planned to have 4 seasons to be released in the year 2020.

The Annual Pass would have included the three outfits displayed above, that is Astra, Brilliant Bomber and Bash. Since the Annual Pass was cancelled, subsequently meant that the above cosmetics would be released through the Item Shop. In addition, Epic Games confirmed that Bao Bros would also be eventually released (In which it was), following the release of the above cosmetics.

There is a chance the Fortnite Crew has replaced the annual pass.

For more information on Leaked Cosmetics and Outfits, visit the Leaked Outfits page! 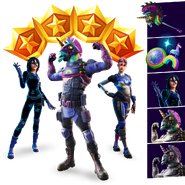