Bash is an Epic Outfit in Fortnite: Battle Royale that can be purchased in the Item Shop for 1,500 V-Bucks. He was one of the selectable candidates in the Community Choice ballot in Season X. Bash was first released in Chapter 2 Season 1.

On September 25, 2019, he lost against his female counterpart, Ragsy, in the second Community Choice against Brite Blaster. He would stay in the leaks until later being placed with Brilliant Bomber as a bundle. However, in 11.30 version patch, the bundle was placed in the Annual Pass 2020 leaked along with Astra. Five hours after datamining, Epic cancelled it. Bash finally made his first appearance two and a half months later on December 15, 2019, making him the first Community Choice loser to make it to the Item Shop.

Bash is a ”leftover“ of the Sunshines and Rainbows Set (hence being part of The Leftovers set), similar to Ragsy to Royale Hearts, Gutbomb to Durrr Burger, and Hothouse to Pizza Pit. He is simply a reskin of the Brite Gunner with the added unicorn head from the Razor Smash Harvesting Tool.

His dark edit style is the first cube-related edit style to be not to be a separate Dark Series outfit. This edit style is in reference to be in line to the Dark Bomber Outfit. 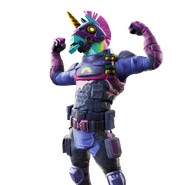 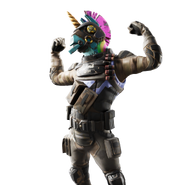 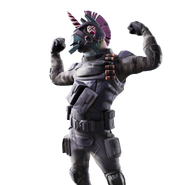 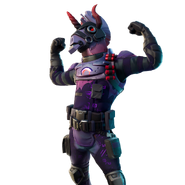