Redeemable codes for 2 Battle Royale outfits, Rebirth Harley Quinn and Armored Batman Zero are found within the comics, as well as some smaller cosmetics themed around the Outfits.

The series ran for 6 issues, with the first releasing on April 20, 2021. The comics can be purchased at eligible Comic Shops, or digitally at DC Universe Infinite (US Only).

A crack splits the sky above Gotham City... a tear in reality itself. This rift pulls the Dark Knight into a bizarre and unfamiliar world, with no memory of who he is or where he came from… DC’s Batman has been drawn into Fortnite!

As our hero fights to recall his past and escape an endless loop of chaos and struggle, he’ll come face-to-face with the likes of Renegade Raider, Fishstick, Bandolier, and more. While the World's Greatest Detective strives to make sense of this strange new world, he’ll uncover the shocking truth about the Island, what lies beyond the Loop, and how everything is connected to the mysterious Zero Point. Uncover secrets never before revealed in-game or anywhere else!

Every fan of Batman, Fortnite, stunning art, and edge-of-your-seat excitement won't want to miss the Caped Crusader facing off against Fortnite champions on the Island in a desperate attempt to save not only himself but other familiar faces from the DC universe… and perhaps the Multiverse too!

Issue 6
In addition, the Armored Batman Zero Outfit was available to everyone who redeemed all 6 codes. This Outfit also released in the Item Shop on July 6th 2021. 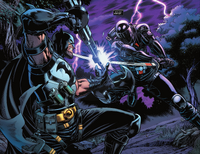 In Reality: NF-1935, The IO teamed up with Lex Luthor to manipulate Batman into helping them regain control of the Zero Point after it had been sealed off by The Spire. They open a Sideways Rift in Gotham City and kick Batman into The Loop. After countless loop of battle royale, Batman finally escape the Loop and is able to explore the island, He teams up with a group of escaped Loopers, and then breaks into the IO Hatch. Inside The Bridge he finds the root of the Spire containing The Zero Point. Eternal Voyager jumps into the uncalibrated Zero Point, and is torn to shreds. Batman sees this, and understands they need to calibrate the Zero Point before entering it. Using everyone's individual "dimensional energy," they send everyone home one by one. Deathstroke sabotaged Batman and Catwoman's escape attempt, trapping them on the bridge. With just the two of them, and the equipment destroyed, they did not have enough dimensional energy to return to their reality. 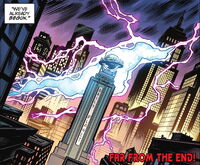 They are forced to travel back into the Loop using the Portal Device they stole from deathstroke to find Harley Quinn, so they can use her added dimensional energy to return. They are successful, and return to their world. While this is happening, Doctor Slone holds a meeting with Lex Luthor, revealing that Slone struck a deal with him to have Batman enter and escape the loop, in exchange for opening a Sideways Rift at the Daily Planet, although this may not be the full extent of their deal.