For information on The Drivable Vehicle, see Armored Battle Bus.

The Battle Bus is a gameplay mechanic in Fortnite: Battle Royale. It was introduced in the Pre-Season.

The Battle Bus is an aerial vehicle in Battle Royale that transports players to the Island at the beginning of every match. It has a specific path which is randomized each game - that it follows over the Island to let players exit and land. This path is always a straight line. Once the Battle Bus has reached the end of its path, players who haven’t exited the Battle Bus will be immediately dropped from it.

The default Battle Bus has a blue paint job with a large hot air balloon inflated by a blue flame under it, allowing the mobile vehicle to fly. One thing to note about the Battle Bus is it has wheel clamps without tires, rendering it immobile on the ground. It is very similar to Lars' Van in Save the World, and even includes a Bluglo funnel on the front.

As the Game has progressed, the Battle Bus has received updated visuals. 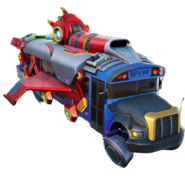 Battle Bus Repair in The Bridge