For the article on The Spray, please see Black Knight (Spray)

Black Knight is a Legendary Outfit for Battle Royale. It could be unlocked in the Season 2 Battle Pass at Tier 70. He is part of the Fort Knights Set.

This Outfit is Jonesy with a black suit of knight armour, with glowing red eyes. His armour has a red symbol painted on it. 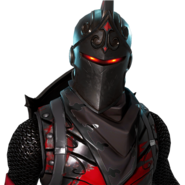 Full View
Add a photo to this gallery
Retrieved from "https://fortnite.fandom.com/wiki/Black_Knight?oldid=173631"
Community content is available under CC-BY-SA unless otherwise noted.