The Bolt-Action Sniper Rifle is weapon which fires a single, fast moving, projectile bullet, which is affected by gravity. The weapon is fitted with a Scope for long range engagements but has only one bullet in its magazine, punishing inaccurate fire. Firing the weapon from the hip is very inaccurate also, having no indication on which direction the bullet will go.

The Bolt-Action Sniper Rifle is obtained in standard ways, such as Chests and Floor Loot. It can also be obtained by getting it from a Supply Drop in Epic and Legendary rarities.

You can sidegrade a Bolt-Action Sniper Rifle to a Hunting Rifle, and vice versa. The Common and Uncommon variants cannot be sidegraded, due to the lack of a Common Hunting Rifle, and that the functionality for these rarities to be upgraded is not in the game.

As of Chapter 2: Season 5, you can upgrade a Bolt-Action Sniper Rifle by interacting with characters for bars.

Heavy Ammo. The Bolt-Action Sniper Rifle has a headshot multiplier of 2.5x. 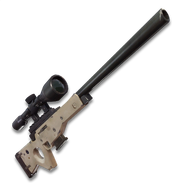 Retrieved from "https://fortnite.fandom.com/wiki/Bolt-Action_Sniper_Rifle?oldid=187340"
Community content is available under CC-BY-SA unless otherwise noted.