watch 03:41
Wiki Targeted (Games)
Do you like this video?
Play Sound

Brite Bomber is a Rare Outfit in Fortnite: Battle Royale, that can be purchased in the Item Shop for

She has the most Shop Occurrences of any cosmetic. 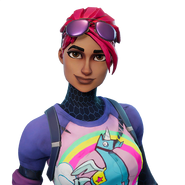 Add a photo to this gallery

Add a photo to this gallery
Retrieved from "https://fortnite.fandom.com/wiki/Brite_Bomber?oldid=207980"
Community content is available under CC-BY-SA unless otherwise noted.