Brutus is an Epic Outfit in Fortnite: Battle Royale, that could be unlocked at Level 20 of the Chapter 2: Season 2 Battle Pass. He is part of the Brute Force Set.

No Dopplegangers. I'm on vacation.

Brutus was a Character at Dirty Docks during Chapter 2: Season 5.

Ain't seen you around lately...
Wearing The Reaper

Brutus dropped the following after defeating him in a duel:

I don't trust anything I can't build with my own two hands.
Don't it feel better when you do it yourself?
Upgrade a weapon

You wait and see. I'm gonna be top fisher, but you can try too.
See? Don't that feel satisifying?
Upgrade Weapons

You do know how to upgrade, don'tcha?
Glad you got some practical skills.
Upgrade Weapons

The upgrade'll be good for ya.
Feels nice to do it yourself, right?
Upgrade Weapons

You're not just gonna use the default kit, are ya?
Now that's what I'm talkin' about.
Upgrade Weapons

Heard Reaper was taking a little break. Let's grab some Bars while he's away.
Good stuff, rook. Always breathe a little easier when he ain't around.
Collect Gold Bars

Brutus was a boss at The Grotto during Chapter 2: Season 2.

The Agency
The Grotto

Brutus is one of Midas' many agents from Chapter 2: Season 2. He was the first agent to apparently defect from Midas and GHOST to work for SHADOW, but rejoined GHOST later on. He is a reoccurring character, who now works independently, though his current whereabouts are unknown.

Brutus could be found as a boss at The Grotto, a sea-bound base on the eastern side of Apollo, and was one of Midas' Agents. He can be seen in his SHADOW outfit in the trailer amidst other agents, indicating his nature as a possible double agent of sorts. He was heavily guarded by Grotto Henchmen and could be defeated. Like all bosses, he had his own unique drops: his Minigun and the Grotto Keycard - which could be used to unlock the vault. Inside the vault was a bounty of loot.

In Brutus' cutscene, his abilities as a weapons specialist and a professional agent can be seen, as he makes a split-second decision to throw a butcher's knife at a possible intruder, landing the knife square in the center of the target pinned against the door, now deterring whoever was to enter. In addition, several SHADOW outfits can be seen hanging up, indicating he does in fact change his clothes, they just mostly happen to be the same. Several portraits can be seen, including one with an unknown woman, and images of a GHOST mug and The Agency, further causing confliction over which his true allegiance was to at the time.

Later in the season, he was the first to join, or defect, to SHADOW. Whether he was always a part of the faction, or only decided to reveal it then, is still up for debate, as at the time he appeared to be against his Boss' faction, GHOST. Regardless, he was now being flanked by SHADOW Henchmen, and appeared in his SHADOW outfit, in a newly modified Grotto until the end of the season.

When the season began, he was seen boxing Ocean in his GHOST outfit on a raft, where some speculate he could have been training Ocean against SHADOW, the faction he no appears to not be involved in. He gets knocked out by Ocean, and has his helmet taken as a trophy.

His former Spy Base, The Grotto, is now flooded and has become Brutus' Basin, a couple inaccessible holes permanently filled with water. The ocean-facing entrance had been closed, indicating that Brutus and his henchmen could have made it out safely before the flood.

Following the fizzled end to the GHOST vs. SHADOW faction war, Brutus went into business for himself as a buyer, seller, and builder of weapons. He appeared to have been popular, as he had made contact with several other inhabitants on the island at the time, including The Reaper, who was a competitor in the arms business that didn't seem to like him, and Menace, a gladiator interested in working for him. He also was interested in fishing, aspired to be "top fisher".

Brutus can be seen in Batman/Fortnite: Zero Point Issue 2 fighting Harley Quinn and DJ Yonder in his SHADOW outfit.

During the Cosmic Summer Celebration, he goes on vacation as Beach Brutus and is seen talking to Ruby on a beach, near his (former?) boss Midas. He stays on the island for a smal while, proclaiming he is on vacation, and not seeming to mind the Alien Invasion - though he indicates the only reason he does not seem to care much is strictly because he is on vacation. 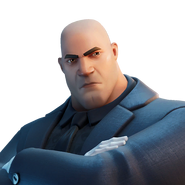 Portrait of Brutus and an unknown woman 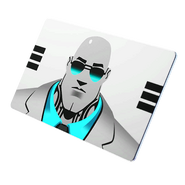