Bunker Jonesy is an Epic outfit in Fortnite: Battle Royale that can be obtained in the Season 9 Battle Pass at Tier 23.

In the Season 9 trailer, Jonesy alongside Peely hid in an unknown bunker for safety during the Volcano Event. Later, the bunker was opened by Sentinel after Jonesy had consumed most of Peely. Jonesy now had a long beard and was drinking a smoothie made from Peely to survive . Bunker Jonesy is aware of the loop and claims that he is an "original Jonesy".

Bunker Jonesy is theorized to be the original Jonesy who entered the loop, noted by his dialogue when talking to the real him in Chapter 2: Season 5. During Season 9, when acquiring the Visions loading screen, it highlighted that Jonesy is aware of the events that were soon to take place in the season's live event.

Despite this, he, alongside dialogue shown when completing quests, portrays him similar to a conspiracy theorist or skeptic, with lines mentioning concepts such as the flat Earth theory. As such the information he gives to player about the loop, or other topics he mentions such as reboot vans may be unreliable.

He can be located at:

He has more dialogue if more outfits with Jonesy model talk to him. 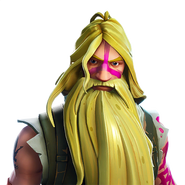 Old Icon
Add a photo to this gallery

Retrieved from "https://fortnite.fandom.com/wiki/Bunker_Jonesy?oldid=181925"
Community content is available under CC-BY-SA unless otherwise noted.