Cameo vs Chic is an Epic Outfit in Fortnite: Battle Royale that can be obtained from reaching Level 80 in the Chapter 2: Season 1 Battle Pass.

Cameo vs Chic is a two character outfit that follows the E.G.O vs A.L.T.E.R storyline.

Cameo: Cameo is the 'good' persona, a fashionista who loves to express herself through the art of fashion. Cameo's hair is cropped short and dyed blue and green, and is shaved on her right side. She also wears two short braids on the right side of her head. Cameo wears dark wraparound sunglasses, a yellow and black striped crop top, a blue miniskirt with suspenders, pink glittery gloves, black leggings and white holographic boots.

Chic: Chic is Cameo's alter ego and is the 'bad' persona, unlocked after obtaining the Cameo vs. Chic outfit and finishing the respective challenges in the Alter Ego mission set of Chapter 2: Season 1. Chic has dark hair, styled with bangs and sectioned pony tails that fall down her back. Her colour scheme are not that colourful featuring round, cloud sunglasses, a black open backed bodysuit, a pink skirt and suspenders, black gloves, black leggings, and pink and black boots and mostly is not expressing herself, moreover, she is hiding her identity similar to a villain. Chic's hairstyle and facial complexion resemble that of Natasha Belmondo from WipEout Fusion. 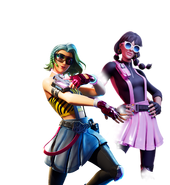 Overtime Promotion
Add a photo to this gallery
Retrieved from "https://fortnite.fandom.com/wiki/Cameo_vs_Chic?oldid=177644"
Community content is available under CC-BY-SA unless otherwise noted.