Grabs a player and deals 60 damage

The Carnage Symbiote is a Mythic Superpower in Fortnite: Battle Royale. It was added in Chapter 2: Season 8.

The Carnage Symbiote allows players to grab opponents through several layers of structures. It also provides a speed boost and enables Glider Redeploy (the player’s glider will be changed to Dark Symbiote). 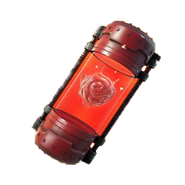