For the article on The Chapter 1 Season, please see Season 3

The theme revolved around water, aquatics and summer.

In Chapter 2 Season 2, The Agency, The Rig, The Grotto, The Shark and The Yacht took over the Fortnite map with two different organizations: A.L.T.E.R and E.G.O, and a third organization called The Agency that collects intel from both sides. With A.L.T.E.R was Brutus, TNTina and Meowscles. With E.G.O was Midas (formerly, undercover), Deadpool and Skye.

On 15 of June, The Device event took place and destroyed The Agency which then became an A.L.T.E.R. base. The Storm was replaced by The Wall Of Water.

The new storm variation titled "The Wall of Water" caused by The Device (event) had collapsed, flooding the entire map.

The introduction to the season begins with Midas sitting on a raft, looking dejected. A shark suddenly appears and attacks him as he tries to paddle away, presumably killing him. The audience then sees that Meowscles was in fact controlling this shark with a Fishing Rod while riding on skis. Meowscles flexes, and then passes a floating bar where Ocean was fighting Brutus, surrounded by spectators. Ocean uppercutted Brutus, knocking him out cold, while taking his helmet off in one blow. She caught the Helmet and waved to Meowscle passing by. As he returns a nod, Aquaman emerges on a giant Flopper to fist-bump him. The greetings end as Aquaman spots that they are about to crash; he points it out and leaves, just as Meowscles jumps from the water onto The Brat's barbecue to save himself from crashing. His skis - now on fire - cause him to burn a trail through the dock he jumped on, into an unluckily parked trailer. Meowscles bursts out the side holding Jellie as they land back into the water, extinguishing Meowscles' skis. Jellie yelps as Meowscles - still carrying him - navigates through floating piles of junk, until he skis off a ramp high into the air. Humorously, while doing this, he throws Jellie off of him. Meowscles lands on the newly-laid wall of the The Authority which Jules was still building, surprising both Aura and Cole. He skids through construction tape and passes a shocked Jules still laying the cement. A Choppa passes to his left, and Meowscles jumps off the cement walls to hang off the side of the vehicle. However, Blaze (the one supposedly piloting the Choppa) was not pleased with seeing Meowscles try and hitch a ride, so she cocked a Charge Shotgun, and Meowscles let go of the Choppa in both fear and likely annoyed compliance. He lands back on water between two Motorboats being driven by Fade and Surf Rider respectively. The two turned to each other, and collided their boats ending in an explosion. Meowscles, managing to ride his shark in front of the collision, emerges unscathed. Meowscles finally ends his journey at The Fortilla. 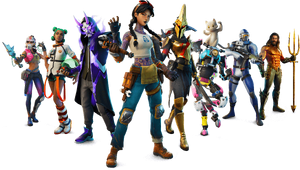 For lists on all challenges from the season, see any of the following: