Fortnite Wiki
Register
Don't have an account?
Sign In
Advertisement
in: Seasons, Story and Lore, Battle Pass,
and 2 more

For the article on the Chapter 1 Season of the same name, please see Season 5

103 days
Chapter 2: Season 5, also known as Season 15, was the fifteenth season in Fortnite: Battle Royale that started on December 2nd, 2020 and concluded on March 15th, 2021, although lore-wise it ended with the Zero Crisis Finale. Its theme revolved around The Zero Point and bounty hunters from different universes and realities, with the slogan "Join the Hunt" and the title Zero Point.

The Herald Thor brought several heroes to the Island to fight the threat of The Devourer of Worlds. Once Galactus arrived, he managed to rip the Zero Point from underground, exposing it to the Loopers. Thanks to Tony Stark's plan, the Heroes managed to stop Galactus and everything and everyone went back to where they came from, and The Zero Point was left unstable.

Following the End of the Battle against The Devourer of Worlds, Agent Jones wakes up in his office answering a phone call from his boss). He is exhilarated to announce that the Heroes had defeated Galactus.

He is told that the Zero Point is exposed and is ordered to enter The Loop, reseal The Bridge and not let anyone escape, which he does right away. However, he rushes away too quick, missing the lady saying "...And do not to draw the attention of The Seven." Jones exits the office and enters The Bridge, planning to gather some of the best hunters across all realities to prevent Loopers from escaping the Loop.

He then sets the Zero Point's coordinates and drops down into it, revealing the Desert biome that it had created.

As Agent Jones hopped into different realities across The Omniverse, Reality started breaking down The Zero Point created portals to each of the Realities that Jones went into and got progressively worse the more Agent Jones used the power from The Zero Point to go to other Realities.

Before Jones could finish gathering hunters, The Zero Point got even more broken and unstable, as it begun to send Reality Waves across the Island.

End of the Zero Crisis

After Agent Jones finishes gathering hunters, equipped with armor from the Hunters he gathered, he returns to the Island only to be met with a Zero Point that is in a worse state than before he went gathering hunters. He then reveals he is angry with the Imagined Order for not helping him with the unstable The Zero Point, and decides he's not going to pursue the Order anymore.

After this, the Imagined Order revokes Jones' credentials as he tries to retrieve all files about The Seven, and after seeing that, he decides what he is going to do next.

Seeing The Zero Point about to implode and holding on to the Battle Bus, he heads to fix the problem, as Slone calls him, telling him that they've lost control and for him to save himself. Jones rebuts saying that 'if he doesn't stop it it could destroy all existence', Slone orders him to escape immediately, which Jones counters saying 'he is going to do what they should've done from the very start, going to The Seven'. Slone tells him that 'he took an oath', and continues saying 'he is betraying everything they worked for' when a Reality Wave sent by The Zero Point causes Jones' Portal Device to fall, so Jones quickly jumps out of the bus to get it back. Grabbing it, he falls to the ground himself but into a bush so survives. Soon after, Slone tells him 'he works for IO', telling him not to go to The Seven, Slone tells him to communicate before Jones crushes his communication device, and thus leaving the Imagined Order for good.

He heads towards The Zero Point, but is slowed down by Hunters fighting:

He then throws his Portal Device at The Zero Point, which causes a meteor to materialize nearby and crash down. The Foundation, the leader of The Seven walks out of his capsule and attacks Jones and almost kills him, but Jones makes a deal with him, telling him that if he helped fix The Zero Point, Jones would get The Foundation to Geno and The Sisters.

Jones starts to close the portals, and succeeds in closing one - This causes a flower blossom to appear in the sky. The Foundation warns them to watch out for Reality Waves. Jones states "Reality waves can change anything in a blink-" but is cut off as one occurs. This changes Jones into a Rift Butterfly - and the player turns into Glyph Master Raz.

Jones then tells the Looper to use his Portal device to close all the portals. After closing the next one, they face the problem that the other portals are too far away. Luckily for them though, Jones can teleport them to each one.

After the looper and Agent Jones teleport, they are met with Hunters fighting with Assault Rifles and Rocket Launchers block their path. A reality wave changes the surroundings into greenery with Autumnal trees, and the player turns into Cluck. Jones then tells the looper "I spent my whole life studying The Zero Point, and this is the first time I've really seen it...", before closing the portal and moving to the next one.
Next, the surroundings are very dark and foggy with crashed cars on fire and Wolves howling and running away, Jones asks the Looper if these were new, before a lightning stroke between the Looper and the Wolves. Salty Towers could be seen in the background.
The next reality wave occurs, and the looper turns into Lara Croft with Primal buildings now replacing The Salty Springs houses.
After this they arrive to the last portal, where they are ambushed by two T-800s on a Choppa with a Minigun. They try to eliminate the looper, but a reality wave occurs before this. They were turned into Chickens and the looper turns back to their original selves.

With the last portal closed, it looks to be completed as a giant flower blossom fills the sky once more and The Zero Point begins to close and seal. The colors surrounding it are intense. But suddenly, the blossom starts swelling and turning red and black. The Zero Point also separates again with it.

The Foundation states it's not enough to completely fix it, and is left with one last option. he needs to contain the blast to prevent reality from ending, so he forms a tower of stone leading up to The Zero Point.

Jones teleports the looper and himself to the bottom of this forming tower. They run up the side of it as crystals and rocks come out the ground. They then fly up to a staircase along the tower, and run towards the top.

As you reach the top, the butterfly Jones turns back to his normal self and the looper is blasted off the platform to fly and watch as a bystander. The Foundation says there'll be no other chance, and that Jones needs to overload the Device to seal off The Zero Point. ght their way back, and that they should not give up. He also says that he will find Jones and that he should tell him everything. Jones says "You have my word!" and overloads the device.

This seals The Foundation in, as The Zero Point sent off it's final blast and the screen turned white.

950 V-Bucks or unlocked through the Fortnite Crew subscription service. The Battle Bundle is replaced by a 25-Tier Bundle for

1,850 V-Bucks for those below or at Battle Pass Level 75. Adding the prices gives you the same price as the Battle Bundle. 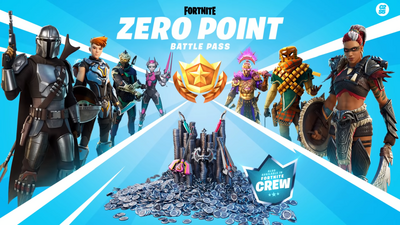 Galactus was defeated, but The Zero Point has been unearthed and it's unstability caused the center of the Island to become a Desert and several locations from the past to be brought back. 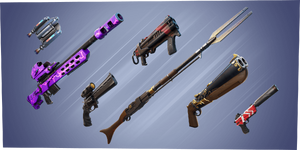 Screen shown during The Devourer of Worlds Event

Screen shown during The Devourer of Worlds Event

The countdown for Chapter 2: Season 5 that began as soon as the event ended.
Community content is available under CC-BY-SA unless otherwise noted.
Advertisement