Fortnite Wiki
Register
Don't have an account?
Sign In
Advertisement
in: Seasons, Story and Lore, Battle Pass,
and 2 more
English

For the article on the Chapter 1 Season of the same name, please see Season 6

Its title and slogan is "Primal" and the theme revolves around Wildlife as the the island turns wild and plunges into a primal age changing most of the loot pool into primal and makeshift weapons.

Following the events of the battle against Galactus, Jones was sent by Slone to fix the Zero Point, reseal The Bridge while not letting anyone escape. Which Jones does by jumping from reality to reality gathering the best hunters from across all realities. However, each reality jump caused The Zero Point to destabilize, to the point at which Characters near it took notice.

Jones, angry that the Imagined Order did nothing to prevent the Zero Point from further destabilizing, brings the leader of The Seven, The Foundation into the Island to fix the Zero Point. However, he fails to do so, and resorts to creating a tower that would contain the Zero Point's final blast and minimize the damage to the Island.

After The Zero Point released it's final blast, it created a autumn themed path of destruction on the Island known as the Primal biome, removing the sand from the Desert and erasing all technology in it's path, heavily damaging the remaining Tilted Towers buildings in Boney Burbs and almost completely destroying the Colossal Coliseum, and creating a mini Tower on all of it's ends. After some time had passed, a village was built around the tower created by The Foundation worshipping the tower now known as The Spire, another village was built on the remains of the Colossal Coliseum, and The Spire like outposts were created around the mini Towers.

Sometime after The Zero Point had been sealed within The Spire, Tarana reaches to the looper about a strange device containing a message that she found, asking the looper to gather artifacts for her in exchange. Once the looper is done, Tarana tells the looper that the device was stolen by the thief Raz, which the looper goes to, Raz tells them about the message, tells the looper that the message directs them to The Spire, a place of great interest to him, and asks if the looper want him to decode in exchange for a few favors.
Raz then sends the looper to steal an Artifact from The Spire, collect an Talisman from a Spire Guardian, and collect a Wolf fang, Boar tusk and Chicken feathers in order to create a disguise for the Looper to go into The Spire and sample the Zero Point Crystals in the location, which the looper does so, retrieving the samples and the Device to Raz.

Raz then goes to The Spire, and finds the Spire Artifact, which makes him more powerful and at the same time corrupting him and leaving behind a snapshot in Colossal Crops, the Raz snapshot in Colossal Crops realises he had commit a huge mistake doing that. Jonesy The First tells the looper that Raz wasn't helping them as much as he was helping himself. The looper then talks to other people, which tell them that the longer Raz has the artifact, the more danger they were in and that Raz was bound to attract attention with the amount of power he has, which makes the Looper and Jonesy The First rush to Raz, now as Glyph Master Raz, to defeat him and take away the Spire Artifact from him.

After a hard fought battle, the looper and Jonesy The First manage to defeat Glyph Master Raz and retrieve the Spire Artifact, however Jonesy The First notes that "Anyone who knows what to look for will see how powerful The Spire is.", then telling the looper "This isn't the end...".

How Did It End?

After the battle against Glyph Master Raz at The Spire, the Imagined Order returns to the Island after escaping during the Zero Crisis, destroying Telescopes and silencing anyone talking about UFO sightings.

Eventually, Crop Circles were created in Colossal Crops and loopers all over the Island start being abducted, and Aliens made their first contact with the loopers in the form of puzzles. The puzzles were eventually solved, finding out a name: "The Last Reality".

The Battle Pass could only be purchased for

950 V-Bucks. The Battle Bundle was replaced by a 25-Tier Bundle for

1,850 V-Bucks for those below or at Battle Pass Level 75. Adding the prices gives you the same price as the Battle Bundle. The Battle Pass could be obtained for free by being in the Fortnite Crew. If you already purchased it with V-Bucks, you would get 950 V-Bucks back. 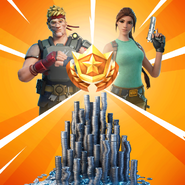 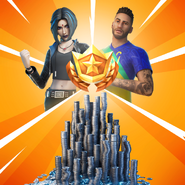 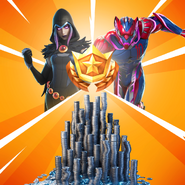 The Quest system that was introduced in Chapter 2 Season 5 is still ongoing, with the addition of the Agent Jones Jump Quests which are like The Mandolorian Beskar Quests from the previous season.

The Zero Point was contained but released a pulse across the Island that erased all technology on it's path, creating the primal Autumn biome.

Teasers for Chapter 2: Season 6 was released on March 13, 2021, during the FNCS: Chapter 2: Season 5 grand finals. The teasers tell us John Jones is angry with the Imagined Order for not helping him with the unstable Zero Point, and decides he's not going to persue the Order anymore (Although dedicating his whole life to it).
After this, the Imagined Order revokes Jones' credentials as he tries to retrieve all files about The Seven. He decides to take them for himself.

Agent Jones has given everything to the Order, and for what? (Teaser 1)

If they won't give us what we want. Then we'll take it ourselves. (Zero Crisis Finale Event Teaser)