For the article on The Chapter 1 Season, please see Season 6

Its title and slogan is "Primal" and the theme revolves around Wildlife as the the island turns wild.

The Imagined Order was in a state of panic due to The Zero Point being exposed. In a desperate act, John Jones was sent by a figure of authority (who we now know as Doctor Slone) to stabilize the Zero Point and stop anyone escaping The Loop. He decided to seek for the best hunters from all realities to help him in his quest.
Rushing away, Jones did not hear an important piece of information - "do not draw the attention of The Seven".

Throughout Chapter 2: Season 5 Jones jumped into other realities with a Portal Device, bringing his desired hunters. However, each reality jump caused The Zero Point to destabilize (Just like in Season 9), to the point at which Characters near it took notice.

Seeing the Zero Point about to implode and standing on the Battle Bus, he heads to fix the problem. However, his boss, Doctor Slone, objects and orders him to leave the loop and return to his office.
A sudden shockwave sent by the Zero Point causes his Portal Device to fall, so Jones quickly leaves the bus to save it. Grabbing it, he falls to the ground himself but into a bush so survives. He crushes his communication device, and thus leaves the Imagined Order.

He heads towards the Zero Point, but is slowed down by Hunters fighting:

This leads on to the solo-experience event, the Zero Crisis Finale.

During this event the player has to close portals (which appeared shortly after the start), guided by Agent Jones. After all the portals had been closed, it was still not enough for The Foundation to fix the Zero Point so he decided to seal it off while he was still inside. This way the blast would be contained.

Also throughout the event came Reality Waves, which changed the surroundings and player's appearance. This gave a chance to showcase the new Battle Pass Outfits, and was the cause of the new Primal/autumnal biome.

950 V-Bucks. The Battle Bundle is replaced by a 25-Tier Bundle for

1,850 V-Bucks for those below or at Battle Pass Level 75. Adding the prices gives you the same price as the Battle Bundle. The Battle Pass can be obtained for free by being in the Fortnite Crew. If you already bought it with V-Bucks, you will get 950 V-Bucks back. 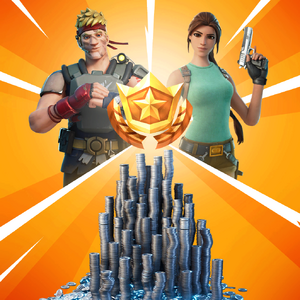 The Quest system that was introduced in Chapter 2 Season 5 is still ongoing, with the addition of the Agent Jones Jump Quests which are like The Mandolorian Beskar Quests from the previous season.

The Zero Point was contained but released a pulse across the Island that erased all technology on it's path, creating the primal Autumn biome.

The teasers tell us John Jones is angry with the Imagined Order for not helping him with the unstable Zero Point, and decides he's not going to persue the Order anymore (Although dedicating his whole life to it).
After this, the Imagined Order revokes Jones' credentials as he tries to retrieve all files about The Seven. He decides to take them for himself.

Agent Jones has given everything to the Order, and for what? (Teaser 1)

If they won't give us what we want. Then we'll take it ourselves. (Zero Crisis Finale Event Teaser)
Add a photo to this gallery

Incoming Transmission - Reality Log 475
Add a photo to this gallery
Retrieved from "https://fortnite.fandom.com/wiki/Chapter_2:_Season_6?oldid=196878"
Community content is available under CC-BY-SA unless otherwise noted.