For the article on the Chapter 1 Season of the same name, please see Season 8

Chapter 2: Season 8, also known as Season 18, was the eighteenth season of Fortnite: Battle Royale. The season started at 5:00 AM (EST) about 13 hours after Chapter 2: Season 7's live event Operation: Sky Fire had concluded. It started on September 13th, 2021 and ended on December 4th, 2021 at 4 PM EST with The End (Chapter 2) live event, ending both Season 8 and Chapter 2.

It was originally scheduled to end on December 5th, 2021, but was later changed to be one day early.

The theme is "Cubed" and it revolves around the invasion of the island by a group of Cubes and how its evil corruption spreads throughout the Island, similar to Chapter 1: Season 6 and just in time for the Halloween season.

This was also the second shortest season of Chapter 2, which had 82 days. The first being Chapter 2: Season 3 which lasted 70 days.

It was the 8th and final season of Chapter 2.

After Countermeasure Device was activated, the Mothership blew in to pieces and, along with the Cubes, crashed on to the island causing destruction. The player is then hit by a crashing Abductor and passes out. After downtime, the Cubes were spread out all over the island and summoned monsters. The new war between the islanders and the Cubes had begun.

In the story trailer, Headhunter, Triggerfish, J.B. Chimpanski, Bracer, and Shadow Ops were walking close to a Cube which awoke and summoned Sideways Monsters to attack the group. The Foundation, which was rifted to the ocean in the previous season, is still underwater, but awakes from his slumber in Gotham Harbor. The Cube Queen says "you should have known we'd return... you thought you saved your little reality.. all you did, was prepare it.. for us, so go on and gather what's left of your 'army' .. ready your defenses.. and now when we are done.. only Nothing will remain."

The War Effort led by J.B. Chimpanski has plans to counter the Cube Queen's plot. His first was to fund additional Turret Stations by the help of Loopers. 7 more Turret Stations were fully funded by Loopers. Shortly after, another funding was set up for Loopers to select a weapon/item for funding, the first was the Shockwave Launcher over the Rift-to-Go.

The Golden Cube awakens the last two Cubes near Misty Meadows and Weeping Woods, where they follow with the Golden Cube. All six Cubes then met at The Aftermath, where they break apart for the Cube Queen to emerge and build The Convergence. She then summons Caretakers to aid the Sideways Monsters, which are the largest and most powerful Cube Monster.

Doctor Slone and her convoy heads to the bunker near Catty Corner and open it, revealing the secret IO base that has been locked since the beginning of Apollo Island.

The Convergence became The Pyramid with the Golden Cube on its top, which finish the construction of The Cube Queen's ultimate weapon.

As the Island starts to destabilize as corruption starts to spread from The Pyramid, the War Effort needs help from Loopers to fund their most powerful weapon available, the Salvaged B.R.U.T.E. It was not as powerful as the original B.R.U.T.E. and Loopers were able to fund for two to be deployed on to the island. The final donation was to fund the Flint-Knock Pistol over the Proximity Grenade Launcher.

The Imagined Order began constructing a fort near Pleasant Park as a last hope of saving Apollo island. Within the next week, the base was finally constructed and a 10-day countdown appeared for The End.

The End of Chapter 2

When the countdown reached zero, The Cube Queen uses The Pyramid to open a rift revealing several Motherships. A fleet of Saucers and Abductors arrived and attack the Loopers at the Guava Fort, breaking the shield produced by the Rebooted Cube. A horde of Caretakers were summoned and attacked the Loopers. An Abductor uses a beam to destroy the Rebooted Cube. Several Loopers were eliminated during battle, though some escaped through the hatch leading to The Bridge.

This leads to a cutscene inside the Imagined Order's base, where it is revealed that Agent Jones has been captured by Doctor Slone, who plans to execute him for treason. Before she can do that, The Foundation arrives, killing several IO Guards. Slone was surprised by this, thinking he had died in the Zero Crisis Finale event during the formation of The Spire. The Foundation then removes his mask, revealing him to played by none other than Dwayne "The Rock" Johnson himself. Slone then proceeds to pull out a Legendary Pistol and fires at The Foundation, resulting in The Foundation then locking Slone inside the room by punching the door lock.

Jones and The Foundation then head into The Bridge. The Foundation reverses the gyroscopic orientation of the Island, while Jones fights off IO Guards. The Scientist and The Visitor, flying over the Island, notice the Loopers and bring them to safety inside the hidden bunker near Guava Fort. The Visitor flies off while The Scientist follows the Loopers into the bunker, after blowing up some Caretakers with grenade-like bombs.

The Scientist then leads the players through the IO's base as the Island begins to vertically rotate and The Bridge starts to collapse. The Loopers are led to the epicenter of the Island, where they remain until a Caretaker smashes the skylight, causing Loopers to emerge in the ocean, far from the Island.

The Cube Queen goes underwater (possibly teleporting) and The Pyramid is completely submerged once the Island reaches a 90-degree tilt, closing the portal to the sideways and the remaining Abductors are destroyed by its descent. The impact of Artemis causes a megatsunami, which then hits the player and leads into the Unplaybable Period informally known as Float to Artemis, who's screen shows the player floating unconscious on a small tree log. After 18 hours, the player gets washed to the new island, and the next chapter began...

The Battle Pass is purchasable for 950 V-Bucks, or if you own the Fortnite Crew, you will have it on season launch.

Bonus Rewards can only be unlocked after reaching Level 100 in the Chapter 2: Season 8 Battle Pass.

The Mothership has been destroyed, unleashing all the Cubes and Abductors inside it onto the Island, corrupting the surrounding area and causing The Sideways to start bleeding into this reality. 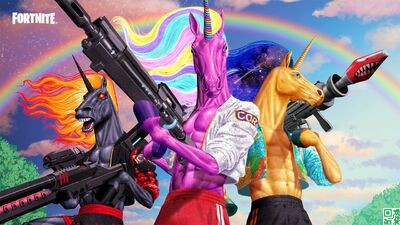 You took quite the fall there... Oh, that's Fabio Sparklemane... He's just getting ready for battle. 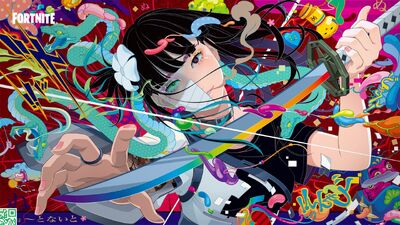 This new threat is no match. She has hunted down scarier demons. 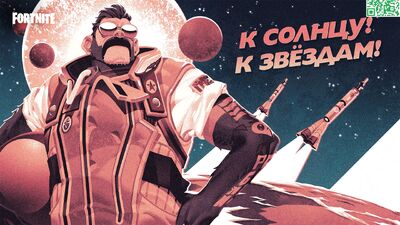 Are you ready, recruits? J.B. Chimpanski is waiting to give his first orders. 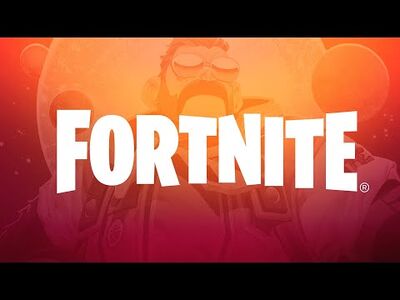