For the article on the Chapter 1 Season of the same name, please see Season 1

For the article on the Chapter 2 Season of the same name, please see Chapter 2: Season 1

Chapter 3: Season 1, also known as Season 19, was the nineteenth season of Fortnite: Battle Royale and the first season of Chapter 3. The season started at 10:00 AM (EST) after the downtime Float To Artemis concluded taking place after Chapter 2: Season 8's live event The End had concluded. It started on December 5th, 2021 and ended on March 19th, 2022.

The title of the season is Flipped, due to the Chapter 2 island turning upside down and revealing a new Island during The End.

During Chapter 2: Season 8, The Convergence was built by The Cube Queen and started spreading Sideways Corruption across the island. A small fort was built near Pleasant Park to serve as a last stand for The Loopers.

During The End, The Convergence, which had transformed into The Pyramid, was used by The Cube Queen to open a rift to her reality. Through the rift, she summoned motherships like the one in Chapter 2: Season 7, Cube Monsters, and Caretakers to destroy the Island and the Loopers on it. However, The Foundation rescued Agent Jones from Doctor Slone and started to flip the island over 180 degrees in order to close the rift. The Cube Queen was defeated by coming in contact with water, resulting in the destruction of The Pyramid and defeat of The Last Reality as a whole*. Once the island was flipped over, a whole new island was revealed as a tidal wave hit the looper, and they went adrift.

After drifting in the ocean for approximately 18 hours, the Looper gets casted away in a small isle east of Sanctuary. There, the Looper awakens and passes by Ronin, sitting in a rock sharpening the Blade of the Waning Moon, and Harlowe, sitting in a fence. After passing by them, the Looper finds more people (Shanta, Gumbo, and Haven) around a campfire. The Looper sits near the campfire and The Foundation explains to the Looper that, while the Imagined Order still have possession of the Zero Point, they will always face threats such as The Last Reality, and possibly even worse. He continues telling them that as long as the IO keeps exploiting the Zero Point, everything is in danger. This is why he needs their help to destroy the Imagined Order to set the Zero Point free as well as freeing themselves from the Island and ultimately, from The Loop for good so that everyone can go home.

Following the flip of the Island, The Scientist attempts to convince The Seven to bring The Paradigm back to the Island. However, most of them do not trust her and refuse to work with her. The Scientist states in an audio log that the flip of the Island was only the first part of a "scrupulously planned attack" that would've reduced the Imagined Order to ashes, but the invasion of The Last Reality hindered that, leaving The Seven "exposed and overextended". He now believes that if the IO attacked them in the vulnerable state they are in, it could result in the destruction of The Seven.

Meanwhile, the Imagined Order starts drilling from the downward-facing side of the Island upward, causing seismic activity to occur across the surface of the Island. They also set up 5 bases throughout the Island. The Scientist attempts to send Rockets to space in order to retrieve what he describes as "war-time essentials", but is repeatedly sabotaged by Imagined Order. After multiple attempts he is able to retrieve the supplies from space along with a black box containing a secret message from The Paradigm, which reveals that she has received his messages and is on her way to the Island.

After some time the full-force of the IO makes it to the surface of the Island and creates a base inside the Pinnacle Peak, where their main drill is also located. The Scientist as well as the rest of The Seven begin preparing for the arrival of The Paradigm as well as the imminent battle against the Imagined Order.

How did it end?

The Imagined Order started using their main drill to drill under the Island, causing heavy earthquakes to happen in the Island, and creating sinkholes in the Island, trying to find The Seven's weak spot. 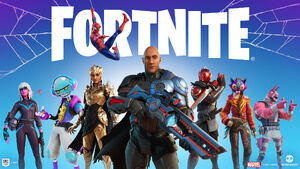 The Battle Pass costs 950 V-Bucks, with a 25-Level Boost offer of 1,950 V-Bucks. If you own a Fortnite Crew subscription, you will unlock the Battle Pass for free. Players can now buy levels past level 100.

Bonus Rewards can only be unlocked after reaching Level 100 in the Chapter 3: Season 1 Battle Pass.

The Island was flipped, turning Apollo upside down and revealing the new Battle Royale Island, Artemis, with all new locations such as:

However, four locations from Chapter 1 returned in Chapter 3:

Two locations from Chapter 2 returned in Chapter 3 as well:

Most of the island was covered in snow during the Winterfest 2021 event.