For the article on the Chapter 1 Season of the same name, please see Season 2

For the article on the Chapter 2 Season of the same name, please see Chapter 2: Season 2

Resistance / War / IO vs The Seven

The title of the season was Resistance, and focused on the war between The Seven and the Imagined Order, mainly from The Seven's perspective.

Following the invasion of Apollo by The Last Reality and the arrival of 3 members of The Seven on the Island, the Island was flipped to reveal a brand new Island on it's flipside, consequently destroying The Bridge. The Imagined Order resurfaced from the other side onto the new Island and set their new base on it, before drilling underground and causing severe seismic activity to occur on the Island.

How Did It Start

Doctor Slone resurfaced with The Fortress Drill in the Island and officially declared war against The Seven as she and the Imagined Order launched an invasion on Artemis, but not without a fight. Maximilian and 4 other Loopers were some of the many that engaged the Order’s incoming siege drills, riding in Scientist-modified Battle Buses as The Seven and the Loopers launched a resistance against the Imagined Order.

As The Foundation and the Loopers became overwhelmed by the IO’s countermeasures against them—such as jammers that prevented building, reinforcements arrived courtesy of Doctor Strange. The party included a returning Iron Man, Black Widow and other members of The Seven—now reunited with The Origin and The Imagined—as the ultimate battle for the Zero Point began.

As the Imagined Order blocked building, the Resistance had to find new ways of battle on the ground. As they trained for better movement, they worked to disable the IO's jammers and bring back building with the help of The Looper, while completing a Security Sweep on Seven Outposts for The Origin, then collecting a sample of the IO's Titan Tank alloy to create the Armored Battle Bus. Meanwhile, The Looper helps Agent Jones teach Peely how to drive. After Building successfully returned on April 2, The Imagined has The Looper place Wiretaps in Imagined Order locations to spy on them, with little success. The week after, an IO Doomsday Device is discovered under Loot Lake. Then, a few weeks later, the IO's new doomsday device, The Collider, is finally revealed. The Seven begin to prepare for the final battle against the IO, starting by sabotaging the IO and simulating the activation of The Collider. The simulation leads the Seven to discover that the Island is on the brink of being destroyed, prompting The Seven to recommission the Mecha and to attempt to bring The Paradigm back to the Island.

How Did It End?

Mecha Strike Commander arrives at Reality Zero from the Ice Moon, The Paradigm piloted the mech whilst the Loopers controlled it's weapons. The Imagined Order set up shields around their tanks and their drills, the Mech destroyed the shields, the tanks and the drills. The Fortress activated it's laser strike and striked it at the Mech, the Mech went into Heartbreaker mode and striked a huge red beam at The Fortress and destroyed it. The Imagined Order sent out more of their combat blimps to the Island, the blimps shot out some missiles to the Mech, too many missiles were shot at the Mech and the Mech's systems went critical. The Mech was down, until Jones called Peely to save it, Peely drove in a Slurp Truck and hopped out to wave to the Mech for attention. The Mech picked up the Slurp Truck and drank the Slurp out of the truck, the Mech was overcharged and was ready to fight again. The Mech destroyed more shields, tanks and drills, when the B.R.U.T.Es from Season X got deployed from the Imagined Order, the Mech destroyed even more tanks, drills and shields especially the B.R.U.T.Es. Jones and The Foundation took down the shield surrounding The Collider and the Mech activated it's Blade Strike mode. The Mech striked at the combat blimps with it's blade and then it attempted to destroy The Collider, but then the bottom of The Collider exploded and the Loopers ejected it. The Loopers landed at the bottom of The Collider and they met up with Jones, Slone was there too and tried to stop Jones and the Loopers from stopping them. The Zero Point shifted realities to the real world where the Durr Burger statue was, then it shifted realities to the Star Wars Reality where Obi-Wan Kenobi and Darth Vader were doing a lightsaber battle. The Paradigm was working on the Mech and trying to get it back online, she eventually got it online and eliminated Slone and helped the Loopers, Jones and The Foundation with the Mech. The Collider's crystals were reaching out to the Zero Point, the Loopers destroyed them and The Collider collapsed. The Paradigm saved the Loopers with the Mech by putting the Mech's hand on top of the Loopers. After this, Chapter 3: Season 3 started. 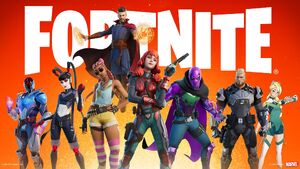 1,950 V-Bucks. If you own a Fortnite Crew subscription, you will unlock the Battle Pass for free.

Bonus Rewards can only be unlocked after reaching Level 100 in the Chapter 3: Season 2 Battle Pass.

The Imagined Order has resurfaced from the other side and has started their attempt to take over the Island and eradicate The Seven, causing a war to breakout on the Island.