For the article on the Chapter 1 Season of the same name, please see Season 3

For the article on the Chapter 2 Season of the same name, please see Chapter 2: Season 3

The title of the season is Vibin' and is themed around summer recreation and relaxation.

The Imagined Order constructed The Collider, a large tower at Loot Lake that could destroy everything in The Loop. It would frequently pulse every day, charging itself up. The Seven rebuilt the Mecha Team Leader to fight against the Collider. In Collision, The Paradigm controlling the mech, the Mecha Strike Commander unleashed onto the island to target the Collider. The Foundation and Agent Jones went into the Zero Point to find Geno.

How Did This Season Start?

The Seven won against the Imagined Order and the Collider was destroyed, the lsland then went into summer recreaton after winning the war.

1,950 V-Bucks. If you own a Fortnite Crew subscription, you will unlock the Battle Pass for free. 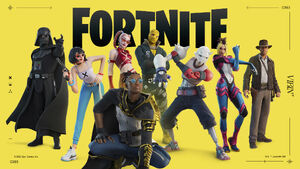 Bonus Rewards can only be unlocked after reaching Level 100 in the Chapter 3: Season 3 Battle Pass.

Click on quest bundle to display quests. If you need a marked map, click on the "Map" under the quest for which it is needed.

For some reason, the game files contain 9 quests in each bundle of weekly quests. Quests that are in the files but not in the game will be marked as disabled.

The war between IO and The Seven is over and the Imagined Order has been defeated, bringing new times of peace in the Island.

The first teaser for Chapter 3: Season 3 was during To Be Continued!, where it showed the new Reality biome. Shortly after the unplayable period started, the website fortnitelookbook.com was launched, revealing the season's title and Cosmetic Items for Evie, Adira, and Malik.

To Be Continued screen teasing the Reality biome.