Chun-Li is a Gaming Legends Series Outfit in Fortnite: Battle Royale, that can be purchased in the Item Shop for

2,200 V-Bucks. Chun-Li was first released in Chapter 2: Season 5 and is part of the Street Fighter Set. 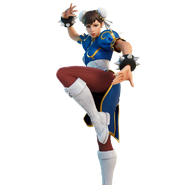 Chun-Li (春麗 or チュンリー Shunrei or Chunrī?, Simplified Chinese: 春丽) is a human from Reality: 3DO-T who was hired by Agent Jones to cause chaos during Chapter 2: Season 5, so that no one can escape The Loop.

Jones arrives at Reality: 3DO-T to take Chun-Li and Ryu to Apollo with him. He arrives at the start of a fight between Ryu and Chun-Li, and opens a Pure Portal with his Portal Device and take them to Reality Zero.

During the chaos, Chun-Li fights against Doggo while using a Lightning Kick on him.