Fortnite Wiki
Register
Don't have an account?
Sign In
Advertisement
in: Legendary, The Seven, Imagined Order,
and 6 more
English

Cuddle Team Leader is a Legendary Outfit in Fortnite: Battle Royale, that can be purchased in the Item Shop for

2,000 V-Bucks. Cuddle Team Leader was first released in Season 2 and is part of the Royale Hearts Set. 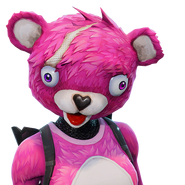 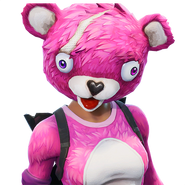 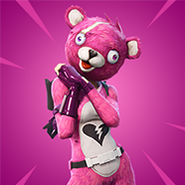 Promotional image with the Brite Bomber Outfit and the Raptor Outfit

Promotional image with the Brite Bomber Outfit and the Raptor Outfit in the in-game news tab
Three's Company
Raptor, Brite Bomber and Cuddle Team Leader are in the Item Shop! 4/25/19 - Part 1

Season 9 Promotional image for the Royale Hearts Set in the in-game news tab
Tough Love
The Love Ranger and Cuddle Team Leader Outfits are available now! The new traversal Pick It Up Emote is also available. 6/12/19

I'm not accepting coaster safety complaints at this time.

It's grizzly out there.

Can you fly this thing?

Can you fly this thing?

I bought this from Cuddlepool.

I bought this from Cuddlepool.

How 'bout a revolver?

Try this on for size.

Take this for a spin.

Let's patch you up.

Have you tried my new coaster? Made the seatbelts myself.

Have you tried my new coaster? Made the seatbelts myself.
Wearing Malik

It takes guts to leave the life you had behind.
Wearing Sabina

Interested in sub-licensing your dragon friend for a theme park attraction?
Wearing Adira

If the coaster did that to you, I accept no liability.
Wearing Snap

You got a ticket?
Wearing Indiana Jones

Hibernation is over. War has begun.

You need another hug?
Wearing The Imagined

No sign of the Imagined Order here.
Wearing The Origin