Dark Bomber is a Dark Series Outfit in Fortnite: Battle Royale that can be bought in the Item Shop for 1,200 V-Bucks. Dark Bomber was first released in Season 6, the result of Brite Bomber touching The Cube in the Dark Reflection Loading Screen.

She is the result of Brite Bomber touching The Cube in the Dark Reflection Loading Screen. Strangely, the same did not happen to Brite Gunner (her male counterpart), so their is no Dark Gunner.

In Season 5, the character Brite Bomber touched the Cube. With abilities similar to that of The Storm, the Cube created an evil clone of Brite Bomber and summoned her in a Corrupted Area. 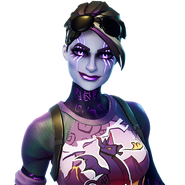 Old Icon
Add a photo to this gallery
Retrieved from "https://fortnite.fandom.com/wiki/Dark_Bomber?oldid=154774"
Community content is available under CC-BY-SA unless otherwise noted.