For the article on the The Spray of the same name, please see Deadfire (Spray)

Deadfire is a Legendary Outfit in Fortnite: Battle Royale that can be purchased from the Item Shop for 2,000 V-Bucks. Deadfire was first released in Season 6 for Fortnitemares and is part of the Western Wilds Set.

Deadfire is Reactive - His appearance changes by outliving other players or dealing damage to players and AIs. He and his cosmetics - Shackled Stone and Dark Shard received the Ghost style in Update v14.50.

Deadfire can be found as a Character at Sheriff's Office.

The Exotic Hop Rock Dualies could be purchased from him from Update v15.40, removing its availability from Cole. After Update v16.00, he no longer sold this exotic.
However, from Update v16.40, he has been selling the Exotic Marksman Six Shooter.

Gunslingin' is a way of life. If you got the stomach for it.
I'd hate to match you in a duel.
Pistol damage

Don't need a fancy pistol to work. Just need one that shoots.
I'll make a gunslinger outta you yet.
Pistol damage with common or uncommon pistols

Watch your back. My pistol's the only friend I trust.
Just like a real gunslinger.
Pistol Eliminations

Tch, ain't been someone's deputy in a while.

Ain't seen you before, cowpoke.

Well well. Look who decided to saddle up again. Good to see you.

I've got my eye on you. Don't try nothin' fishy.
Wearing Mancake

Mysterious things have been happening 'round these parts.

Won't take more'n a second, pard.
Good to have an ally like you out here.
Talk to Deadfire

Pistol's the only heat I ever pack.
Pistol. Best friend you'll ever have on the plains.
Pistol Eliminations

Make it clean. Make it count.
Ayup. That's how we did it back in my glory days.
Head Shot Eliminations

It's time to take 'em out, partner.
These outlaws are dangerous. Don't let 'em get too close.
Deal damage within 20 meters using a pistol

It's time to take 'em out, partner.
Well, that's one less outlaw roaming the land.
Eliminate Raptor, Zenith, or Blackheart

Some monsters are dangerous up close.
Out on the prairie, it's best to keep your distance
Eliminate an opponent at a distance greater than 25 meters

Time to get centered, building pistols calms the soul.
Nothing like some smoooooth action.
Craft pistols

Now how about some precision shootin', partner?
Nice work, pard. I guess you have some skills after all.
Headshot Damage to players with Pistols or Sniper Rifles

Slingin' lead at some outlaws always helps me focus
When the spirit is centered, it is open to outside energy.
Pistol Damage

Picking up some spicy energy coming from the ol' Power Plant, go check it out.
Yee-haw! Nothin' like messing with forces beyond human comprehension!
Bathe in the Purple Pool at Steamy Stacks

Someone's gotta take the plunge in the Zero Point. Might as well be you.
You survivied? Well, I reckon I owe Kit some gold.
Enter the Zero Point

I got some spiritual interference coming from these crystal trees...
Well I can't sense any more energy, but my headache's gone so that's nice
Destroy Crystal Trees

It's time to upgrade your steel, pardner.
Nothing like some smoooooth action.
Upgrade a weapon 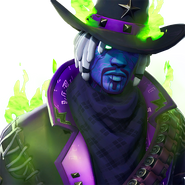 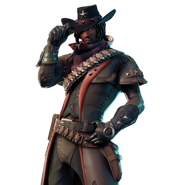 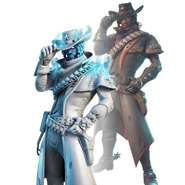 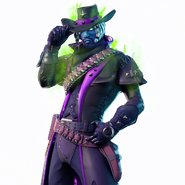 Promo for the Ghost Style in the News Tab

Appearance in the promo for the Team Terror Limited Time Mode

Appearance in the promo for the Wild West Limited Time Mode 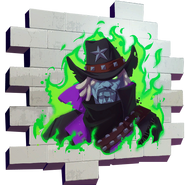