For the article on the the Save The World Mythic Ninja Hero of the same name, please see Dire

Dire is a Legendary Outfit in Fortnite: Battle Royale, that could be unlocked by reaching Tier 100 of the Season 6 Battle Pass. He is part of the Full Moon Set. 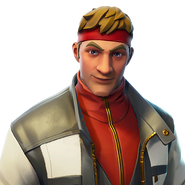 Dire was a Character in Chapter 2: Season 8, He spawns at Camp Cod.

Mess with the Alpha, get the pack.

It takes a creature to defeat a creature. Tell the wolf pack to join the fight.
Awoooooooo!
Emote at the Weather Station, Fort Crumpet, or Lockie's Lighthouse

Lead the pack out of the storm.

Welcome back to the pack.

I've no need for Bars. 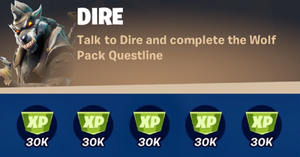 It takes a creature to defeat a creature. Tell the wolf pack to join the fight.
Awoooooooo!
Emote at the Weather Station, Fort Crumpet, or Lockie's Lighthouse

Establish dominance to get the pack to fall in line.
The pack respects your brutal leadership.
Damage wildlife with a melee weapon

Keep the pack focused on the battle ahead instead of the local cuisine.
"Grrreat job! Plus they aren't eating trash anymore.
Destroy a dumpster at Lazy Lake or Pleasant Park

The emotional support of the wolf pack is with you. Summon your wolf strength!
That's a blow to the monsters. The pack can now celebrate!
Eliminate Cube Monsters in The Sideways with a melee weapon

Show the wolves they're free to run across the plains once again!
Your wayward abandon has impressed the wolf pack.
Travel on foot in Misty Meadows