Doctor Doom is a Marvel Series Outfit in Fortnite: Battle Royale, that could be unlocked at Level 67 of the Chapter 2: Season 4 Battle Pass. He is part of the Doctor Doom Set.

Victor Von Doom (aka Doctor Doom), along with many other marvel heroes and villains, was summoned by Thor to Apollo to help fight against Galactus. Shortly after Doom arrived, he took over Pleasant Park, and transformed it into Doom's Domain.

Doctor Victor Von Doom was a Boss at Doom's Domain during Chapter 2: Season 4.


Reach Level 74 in the Battle Pass


Stage 2 of 3 - Visit a giant throne as Doctor Doom 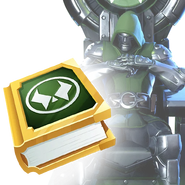