Fortnite Wiki
Register
Don't have an account?
Sign In
Advertisement
in: Legendary, Selectable Styles, Story and Lore,
and 7 more
English

Tier 1 of the Season 5 Battle Pass

Drift is a Legendary Outfit In Fortnite: Battle Royale that could be obtained at Tier 1 in the Season 5 Battle Pass. He is part of the Drift Set.

Drift was an ordinary human from California in the "real life(earth)" world. In Season 4, when the metal Durr Burger teleported to California, he visited the burger to spray graffiti art of a Kitsune mask in a pink hood.

It so happens that at that moment, another Rift brought both the burger and Drift back to the Reality Zero. Drift was greeted by Brite Bomber, Rex, Cuddle Team Leader, and a few other people who were on a road trip. Drift seemed to gain paranormal powers related to the Rifts, visible in his cloak and harvesting tool. He followed the others along on their road trip, and became friends with Brite Bomber. They visited several locations across the island. In Season X, Drift gained a female counterpart from an alternate timeline, called Catalyst.

Years after Season 5, either before or after The End event in Season X, he was seen hugging Brite Bomber and a pet dog, watching the last sun set of chapter 1 in the Last Stop Loading Screen

In Chapter 2: Season 5, Drift was contracted by Vi, the last surviving member of Fox Clan. 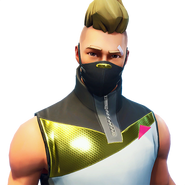