20
Dusty Divot was a Named Location in Fortnite: Battle Royale that was added in Update v4.00. It was located north of Salty Springs and west of Mega Mall. 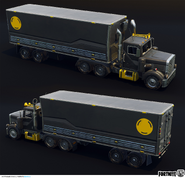