For the article on His STW Counterpart, please see Bladestorm Enforcer

Enforcer is a Legendary Outfit in Fortnite: Battle Royale that you could get after completing 7 of the Road Trip Challenges in Season 5.

This outfit has white, grey, and black accent features with glowing blue eyes. He bears a slight resemblance to Carbide.

The Enforcers are actually several people, whose goal is to restore balance and order in the fabric of time and reality. Only three were seen in their loading screen, but they are probably just a small squad from a much larger force. When the Visitor created the Rift in Season 4, this likely damaged reality. So the Enforcers come along and close several rifts, attempting to restore their balance.

One thing they have been confirmed to do is bring the Motel sign back to its place after it rifted away to some other dimension in Season 4. It is unknown if they did anything else of relevance to the island during this time.

It is a high possibility that they set up the Rift Lab under Wailing Woods in Season 6, the one after their first appearance. In this lab, several rifts were contained and studied, and at some point a stabilized wormhole network was established. A couch cushion within the lab was covered in logos very similar to that of the Enforcers. This exact same logo was also seen on the back of the B.R.U.T.E., possibly hinting at the Enforcers creating them.

The Enforcers are believed to be the enemies of The Visitor and the rest of The Seven. They seemingly closed many of their rifts, and the Visitor said this in his recordings: "I suspect they are not the only ones watching," and later " If they are correct, it will be the end. " The They likely refers to the Enforcers. They would obviously be keeping a close watch on the Seven and their schemes, and probably warned them about the risks of destroying The Zero Point. 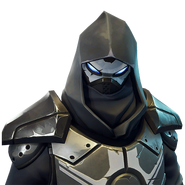 Signing Back In loading screen featuring Enforcers
Add a photo to this gallery
Retrieved from "https://fortnite.fandom.com/wiki/Enforcer_(outfit)?oldid=183572"
Community content is available under CC-BY-SA unless otherwise noted.