Epic Swords of Wonder is an Epic Dual Wielded Harvesting Tool in Fortnite: Battle Royale that could be obtained at Level 70 of the Chapter 2: Season 2 Battle Pass.

Originally called Legendary Sword of Legends, The Epic Swords of Wonder are a pair of swords featuring forged with crystals. 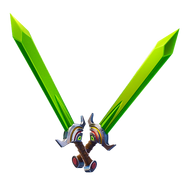 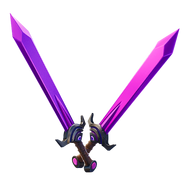 SHADOW
Add a photo to this gallery
Retrieved from "https://fortnite.fandom.com/wiki/Epic_Swords_of_Wonder?oldid=152196"
Community content is available under CC-BY-SA unless otherwise noted.