Eternal Voyager is an Epic Outfit in Fortnite: Battle Royale that can be obtained from the Season X Battle Pass at Tier 87.

Eternal Voyager is an alien-like creature that seems to have taken the place of an astronaut. His skull style has an exposed skull with a flaming aurora surrounding it as a reference to Ghost Rider , and all his styles has features an astronaut’s suit. 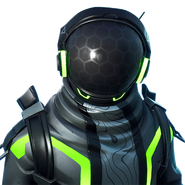 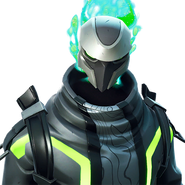 Cyan Style
Add a photo to this gallery
Retrieved from "https://fortnite.fandom.com/wiki/Eternal_Voyager?oldid=181957"
Community content is available under CC-BY-SA unless otherwise noted.