The Flare Gun is an Explosive Weapon in Fortnite: Battle Royale. It was introduced in Chapter 2: Season 3.

The Flare Gun is primarily used for spotting opponents and marking them, much like a Shakedown. When fired, if the projectile stays in the air long enough, it will mark all opponents in a 50m radius for 60 seconds. It can mark opponents in hiding places.

The Flare Gun's projectile deals explosive damage on impact to all players in the vicinity. If the Flare Gun is fired at a wooden structure, it will set it alight.

When all 6 charges of the weapon have been depleted, the item will disappear from the player's inventory. Unlike the Harpoon Gun, the weapon needs to be reloaded between shots.

Fire Ammo, which cannot be obtained outside of the weapon's reserve. The Flare Gun has no headshot multiplier.

The Flare Gun is a projectile weapon, with the First Shot Accuracy enabled. There is no damage falloff on the Flare Guns projectiles, but it is affected by gravity. The Flare Shot will stop at a much shorter range than other projectiles due to the nature of the weapon.

From when the weapon was last obtained in Chapter 3: Season 1: 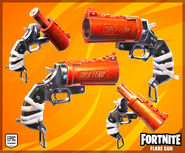 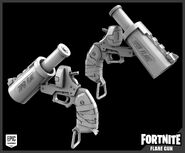