Flush Factory was an unnamed POI on the Apollo map, located near Sludgy Swamp and was formerly a named POI that appeared on the southwest end of the Athena map. It consists of a large toilet factory with average amounts of loot. This tended to be a good location to go, as usually a small amount of players landed there, and surrounding towns were far out.

The compound to the northeast on the Athena map, sometimes known as Yonder Yard, featured a nightclub in its largest building. When approaching, players would hear deep, rhythmic bass beats. It was possible to spray paint the dance floor but it took a few tries. An All Terrain Kart and a Shopping Cart would spawn in the parking lot.

It was destroyed by the iceberg upon the release of Season 7, but not before A.I.M. was able to land there. Before the end of Season 10, the top of it could be seen peeking through the snow.

In Chapter 2: Season 5, Flush Factory returned as an unnamed POI near Slurpy Swamp.

There was also a small outlet for Flush Factory in Mega Mall. 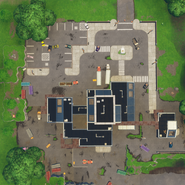 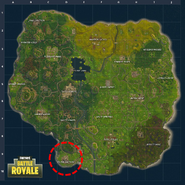