Fortnite: Creative is one of the three main game modes in Fortnite. It is an open sandbox where players can create their own custom islands, or discover featured islands created by the community. 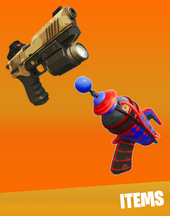 When you enter a game of Creative, you will first be in the current Featured Hub, where you can play featured islands, community-created islands, or work on your own island. You can enter these islands through different Rifts, and the golden rift will take you to your own island.

If you interact with the small screen to the right of your rift, you will be given a list of options for which Island you want to use.

Placing down props and builds will take up memory. Most islands have a maximum of 100,000. XL Islands are sixteen times bigger and divided into grids, with 100,000 per grid.

Many Creative games can be entered from the Lobby. The Discover tab sorts Creative games by theme (Party, Deathrun, Deathmatch, etc.) All Creative islands have a unique 12-digit map code (example 0123-4567-8901).

There is no set story and lore in Creative as it is left open by island creators. Though each Creative island are their own Realities.

Prefabs place down structures that are on the Battle Royale island, including some unique prefabs that cannot be found in Fortnite: Battle Royale, making them exclusive to Creative.

When you first attempt to place the prefab, a holographic radius will appear. This radius shows where the prefab will be placed once the player throws it. If the hologram is red, it will mean that the terrain isn't right for the prefab, or there is too much memory being used on the island.

Galleries place down different columns that consist of individual tiles. These tiles can be wall tiles, roof tiles, floor tiles or props. If the gallery consists of only props, it will be titled "Prop Gallery". There are many options to choose from (See Here) for full list), and similar to Prefabs, most of them are taken away from locations on the Battle Royale Islands

Similar to prefabs, a holographic radius will appear when you throw these. This radius shows where the gallery will be placed. If it is red, it means that either you are not placing it on the right terrain, or the island has too much memory.

Devices are small props that change the way the game is played. Once a device has been interacted with, you will see a list of settings for the device. These settings alter the functionality of the device.

There is a wide range of devices to choose from (See Here for full list). Upon interaction with the device (along with the settings) is a short sentence about the function of the device, and different sentences that cover the action of each setting.

Devices can be used to do a large variety of things that alter the gameplay at game start, such as add POI markers to the island, add a storm circle to the island, add background music, floating structures, and so much more. The catalogue of devices expands within most updates.

Weapons and consumables can also be used in creative (See Here for full list). Most of these are taken out of Fortnite: Battle Royale. Crafting resources from Fortnite: Save the World (such as Ore and Twine) are also included in Creative. There are also items that are only in Creative. They come in Common, Uncommon, Rare, Epic, Legendary, Mythic, and Exotic.

The Phone can be used to place down different tiles and devices. The phone automatically enters your inventory if you have island edit, and cannot be removed.

Point the phone directly at the tile you wish to change the position of. When this is selected, you can duplicate, delete, move or rotate the tile. This also works with Devices. You can also select multiple tiles (up to 100). 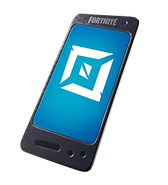 Anyone with island edit has the ability to fly in this game mode. There are multiple options you can choose from when in flight mode, including flight speed and phase through tiles.

The Block was a competition that was available from Season 7 to Season X where you could build your own location that featured on he Battle Royale Island. To do this, you would have to select The Block Island from your island options, and then build your ideal location on the 25x25 cube at the center of that island. Lots of different members of the community had their island featured on the map.

The hub will change its design around once a week on average. The hub is where players spawn when they launch a game of Creative. Here, they can access their own island and their friends' islands, as well as community-built islands that are featured. Also, they can enter island codes to pick their own island made by a creator.

Each hub will normally have a built-in puzzle that players can solve. Sometimes this can involve completely different creative maps. There are additionally Matchmaking Portals that players can load into and play community created maps with other players.

The top 3 playing Creative maps, the top 3 growing maps, and two featured maps are shown in the hub by each section:

In addition the three up and coming Creative maps are featured in the hub.

This started in Chapter 2: Season 1, and is still going on today. This feature allows the community to design the Featured Hub, which is the area players spawn when they first enter a creative match. In order to create your own custom hub, you must have a creator code. You need to build your hub on Creative Hub Island A, Creative Hub Island B, or Creative Hub Island C.

Promotional image for the scoreboard at game end

Promotional image for the addition of the island code in the main menu
Español Italiano
Community content is available under CC-BY-SA unless otherwise noted.
Advertisement