Fortnitemares: Wrath of the Cube Queen

Fortnitemares: Wrath of the Cube Queen

Wrath of the Cube Queen

The Cube Queen’s emergence brings changes to the Island.

Since Fortnitemares began (and even before), the Cubes have been mobilizing. Their migration towards the Island’s center wasn’t just to spread corruption they’re now at the center forming The Convergence. What is the purpose of this mysterious structure? 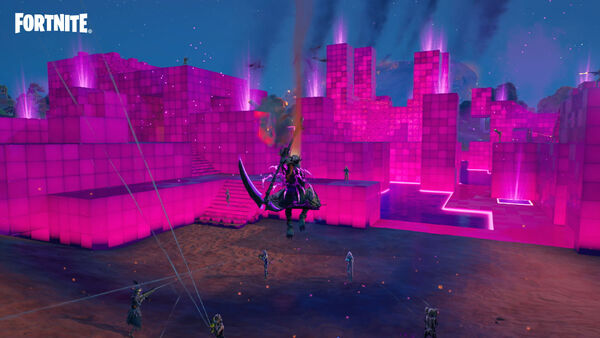 You’ve come across the Cubes and fought back the Cube Monsters, but a new force has joined their ranks: Caretakers are The Cube Queen’s strongest warriors yet. Tall, foreboding, shadowy apparitions, their spectral tendrils pull you directly into The Sideways for a showdown on their home turf. Survive a Caretaker’s assault and you’ll walk away all the richer. 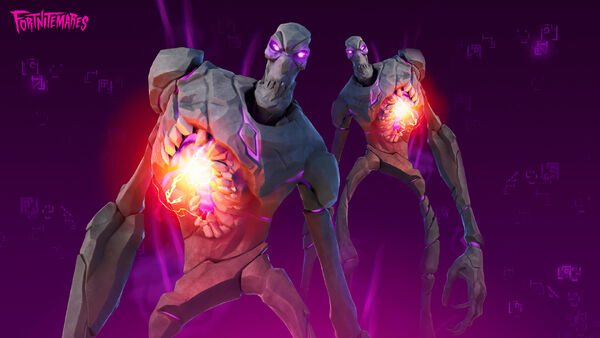 Things don’t end there. The Cube Queen’s wrath has given rise to a new Sideways weapon the sinister Sideways Scythe as well as returning items like Witch Brooms and the Pumpkin Rocket Launcher. Use the Scythe and these wicked supplies to hold your own in battle. 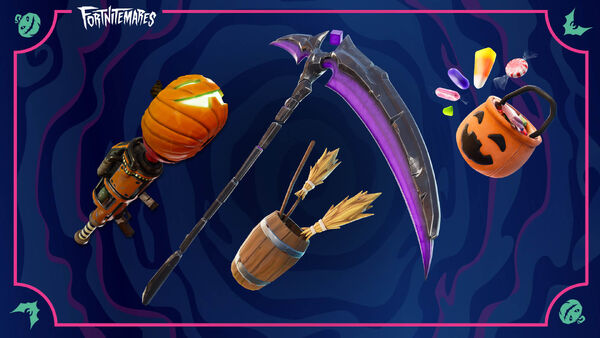 Candy has also made a return, this time with the new Zero Point Pretzel in the mix.

Horde Rush is back! The Cube Monsters are pushing out of the Sideways and into our realm. Fight alongside your teammates to rack up your score by finding score multipliers, earning combos, and eliminating as many monsters as you can. To win, survive at locations across the map and take down the Final Boss! 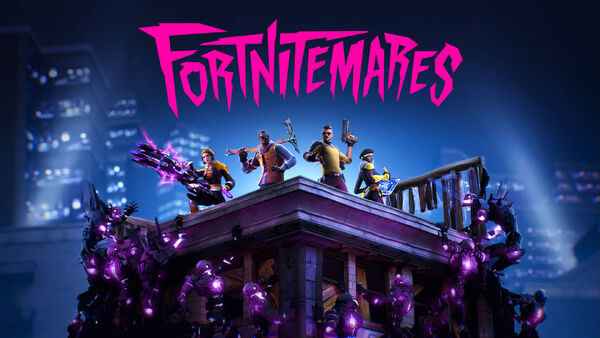 The Horde Rush LTM will be live from October 19 at 9 AM ET to November 2 at 9 AM ET, but not just on its own. There’ll also be Horde Rush Quests you can complete for special rewards! Unlock the Thinking Juice Back Bling, a Cube Queen Banner, and the Cuddle Scream Leader Spray. 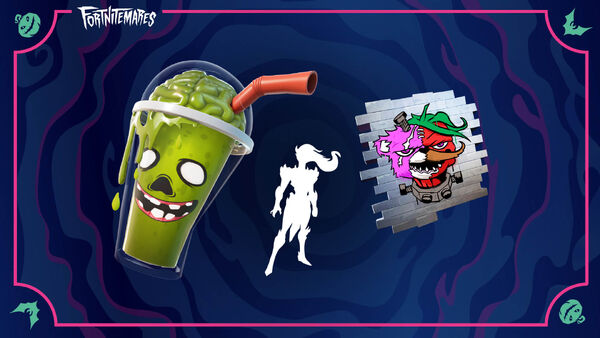 Also, be on the lookout for a Horde Rush Tournament this week with more Locker items to earn! Practice the mode with your squad ahead of time to prepare. More details will be available soon in a blog post and the Compete tab in-game. As the cards foretold, Cubic chaos has been unleashed in Fortnitemares 2021. Fun awaits amid the madness:

Help an Oracle, Ariana Grande and A Ghostbuster for Special Rewards 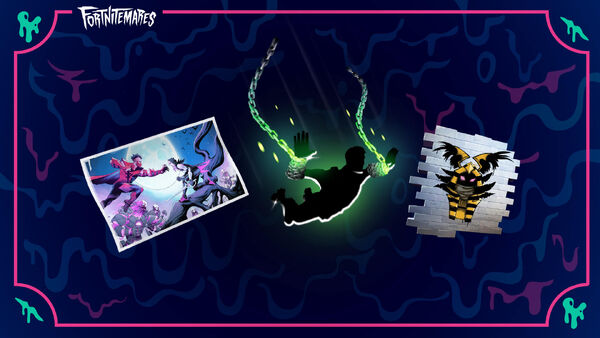 2. Ariana Grande has returned to the Island, but now in new gear ready to take down monsters. “Spacefarer Ariana Grande,” the galaxy’s greatest monster hunter, is inviting you to join her hunt. Complete her Monster Hunter Questline to unlock the new All-Weather Extractor Pickaxe (Dark Style)! 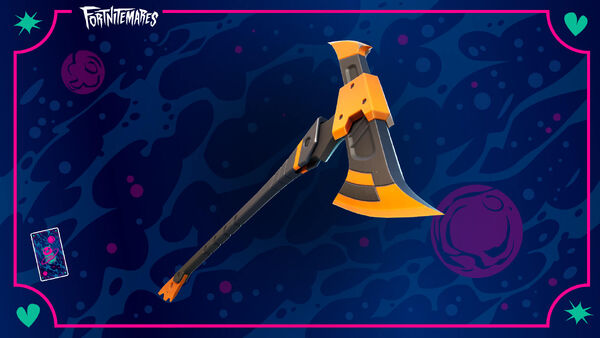 As a Fortnite Crew bonus during Fortnitemares, active Fortnite Crew subscribers who complete the Monster Hunter Questline will receive the Brite Style of the All-Weather Extractor Pickaxe (in addition to the Dark variant). 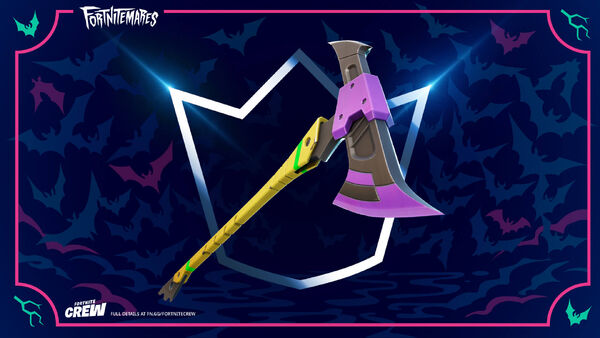 3. Scrolls tell of the Spirit Vessel, a powerful artifact that can restore Dark Jonesy’s visions. Help Dark Jonesy in his The Oracle Speaks Questline to unlock the Cube Cruiser Glider, an unfolded Cube you can ride on! 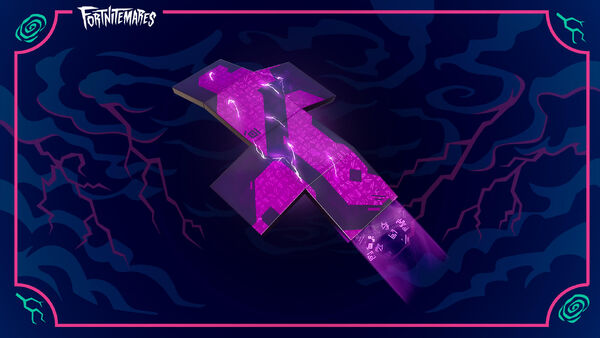 Hollowhead’s Punchcard won’t be the only Punchcard going live at 9 AM ET, though 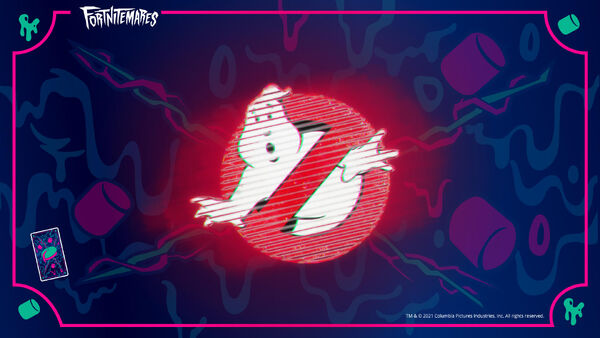 Not just in Fortnitemares, Daily and Weekly Punchcards have been expanded and reworked, now offering additional objectives and more XP for each completion. We’ve replaced the “Spend Bars” and “Place Top 10 with Friends” Quests with new Quests that rotate weekly. Each Daily Punchcard reward has recently been upgraded to 45,000 XP (previously 30,000 XP), while completing Quests in your Weekly Punchcard rewards 75,000 XP (previously 50,000 XP). To help celebrate Fortnitemares 2021, two Power Leveling Weekends are coming soon! Log in from October 22 at 7 PM ET - October 25 at 7 AM ET and October 29 at 7 PM ET - November 1 at 7 AM ET to unlock a Supercharged XP bonus and level up faster whenever you play. This supercharged pool is free to use at your leisure, but you can only get it during the Power Leveling Weekend. 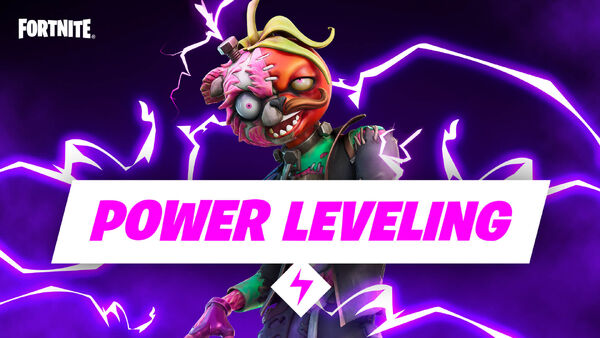 Group up, punch those cards, and supercharge your Battle Pass progress!

Bring your Fortnitemares to life with papercraft cosplay and figures once again, this time with a new nightmarish selection! Until November 1, head to fn.gg/cosplay to download and print your paper materials. After that, build Peely, Meowscles, and Fishstick masks based on the masks of All-Hollow’s Steve, as well as mini-models of Shadow Midas, a crimson Sanctum, and Kevin (yes, the Cube!). 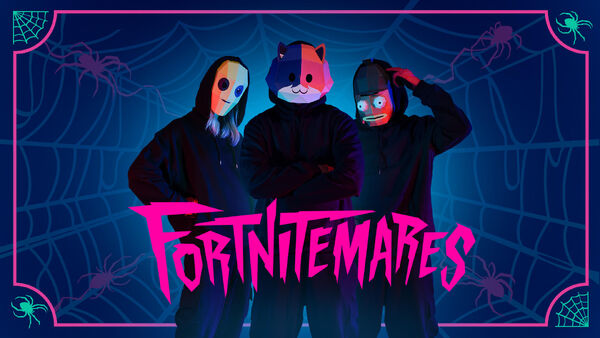 Build and share! Spread the holiday fear by posting your cosplay and constructions on social media with #MyFortnitemares

Wrath of The Cube Queen wraps up at 9 AM ET on November 2, but The Cube Queen’s wrath won’t subside. The Sideways Scythe (and Caretakers) will remain, and The Convergence will evolve... 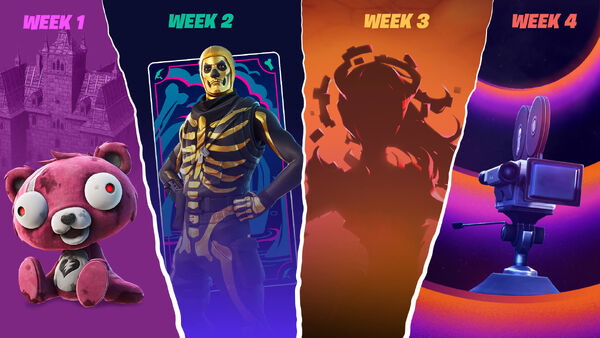 Your fortune foretells a lot in this year’s Fortnitemares… In fact, things are in the cards for you all the way ‘till November 1. 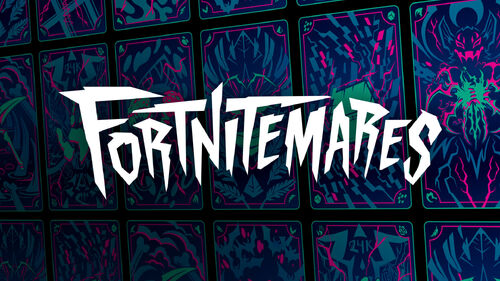 The first thing in the cards? Starting now, jump into Halloween-themed maps, games, and experiences — made by the community during the Fortnitemares Callout! These will be featured in the “Fortnitemares” section of the playlist menu. 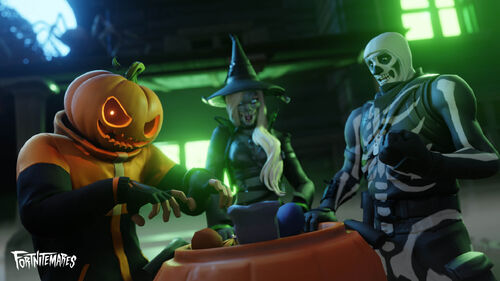 Here’s what else is in your fortune this month. 🎴🃏🎴

Fortnitemares 2021 has many new and returning Halloween Outfits in store. Some of what to expect? Throughout the month, cards will reveal legendary monsters making their way to the Fortnite Item Shop, as well as classic Fortnite characters getting new Halloween twists. With each Item Shop debut, a card will flip over in an evolving blog post.

Iconic creatures include the Universal Pictures-inspired Frankenstein’s Monster and The Mummy, part of the Universal Monsters Set! Keep up with the card flip page and our social channels to see when they storm into the Item Shop. (The Mummy will also be lurching on the Island as a Character later in the month, trying to find his way home to the Underworld.) 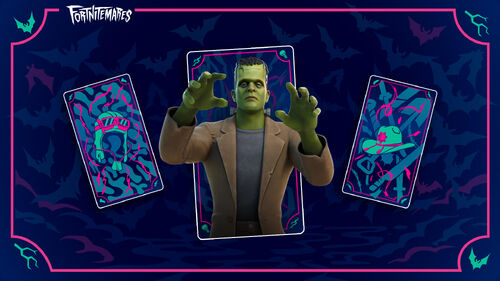 To help kick things off, the community-inspired Boxy and Boxer are in the Item Shop now, October 5, with new glowing versions of their alternate Spectral Styles! 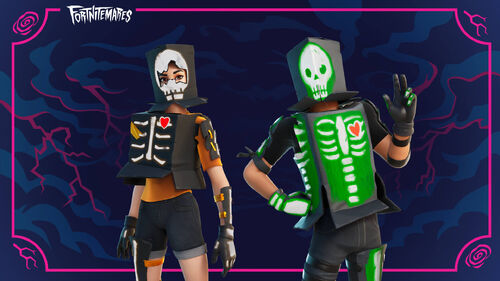 Also, throughout October, you can visit the Battle Bus and Fortnite cosplay characters at Universal CityWalk, adjacent to Universal Studios Hollywood. Different characters will appear throughout the month, with special appearances by new Fortnitemares characters the day they go live in the Item Shop! Stop by and take a picture.

Many new and returning Outfits are in store for Fortnitemares 2021, including storied monsters making their Fortnite debut. Classic Fortnite characters with new Halloween twists are creeping in also. 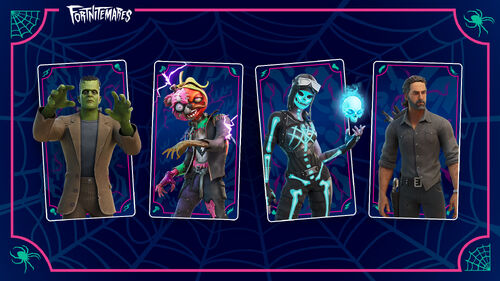 There’s no pattern as to when the rest will flip over, but try using the hints to sew what they’ll reveal.

That’s all the cards for this week. Check back on October 12 for a new row of cards!

A New Side Of The Cubes' Plan

The Cubes are mobilizing for the next step of their plan. Later in the month, they'll escalate their domination of the Island. But take heart! Strengthen your resolve with a new weapon from The Sideways and returning Halloween tricks. A special LTM will be returning as well...

During this Cubic chaos, there’ll also be Quests to accomplish for eerie rewards. 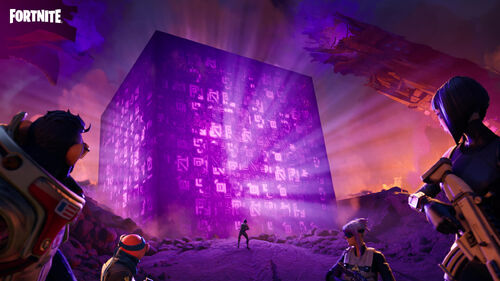 Speaking of Halloween tricks, the new Dual Fiend Hunters are on the Island now! 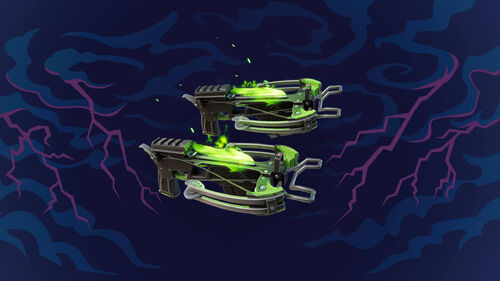 Get Some Scares At Shortnitemares

Fortnitemares 2021 will be wrapping up with the third Short Nite film festival! Like previous Short Nites, “Shortnitemares” will feature animated shorts — but this time, the shorts will be based on the ghoulish and sinister. Also, this Short Nite will take place in a creator-made movie theater (created by Quantum Builds), where each short’ll have its own theater room. Choose the order you watch them in, or watch them all in a loop in the festival room. 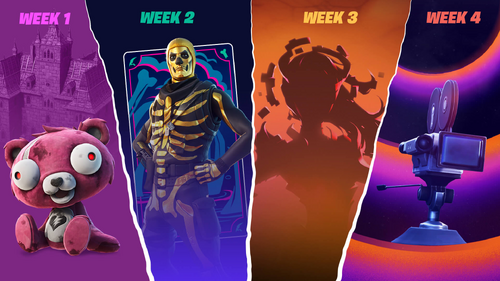 During this Halloween event there are a variety of challenges with free rewards and a lot of experience, both in Battle Royale Mode and in Limited time mode Horde Rush.

Can't trick withouth the treat.
You got some of my favorites!
Collect Candy

See how this things handles.
Now that's a great way to clean up and get around.
Land while riding a Witch's Broomstick

Get ahead of the competition.
Get it? A-HEAD! Hehe. A little pumpkin humor for you.
Eliminate an opponent with a Pumpkin Launcher

We're detecting tremors where everything should be stable. Investigate.
It's not a Class V spirit, but it's definitely something.
Deploy Seismographs in Misty Meadows or Catty Corner

Don't be fooled by their cuddyly appearance. Those Pufts are destructive and devious.
Who wants toasted evil marshmallows?
Exterminate mini-Pufts with a Pickaxe in Sludgy Swamp, Lazy Lake, or Retail Row

This old trap hasn't busted ghosts in a long time. Let's rebuild it.
This may seem reckless, but hey! Science is reckless.
Retrieve mechanical parts by destroying Cars

The Ghostbusters will be back! Maybe these signs will scare off the ghosts!
A wise man once said: "I ain't afraid of no ghost."
Place Ghostbuster signs in Holly Hedges, Dirty Docks, or Pleasant Park

Finally, the ghost traps are ready. It's time to put them to good use!
Now you're a Ghostbuster!
Deploy a Ghost Trap

Carve out the competition.
Always a winning strategy.
Eliminate enemies

Aim for the head.
Nailed it!
Geat headshots on enemies

Keep the nasty ones away from your teammates.
Save the poison gas and explosions for Hallow's eve celebrations.
Eliminate poison or exploding enemies from at least 5m away

These spawners are perfect targets.
They can't spawn without a spawner. Can they?
Destroy enemy spawners

Those ranged attackers have gotta go.
Make them fight you face-to-face, like all honorable gourds.
Eliminate ranged enemies

Stock on sweet surprises for battle.
Did you find something to your tastes?
Open chests

It's time to put an end to this horde rush.
They'll think twice before they swarm you again.
Deal damage to enemies 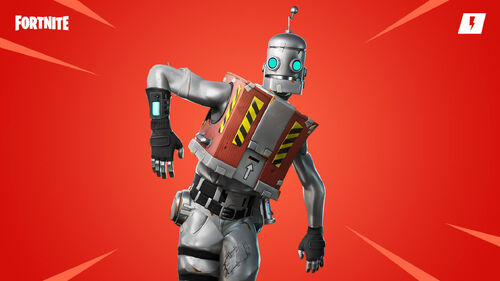 “QUIET PLEASE. I AM FIGHTING” - JONSEE-BOT 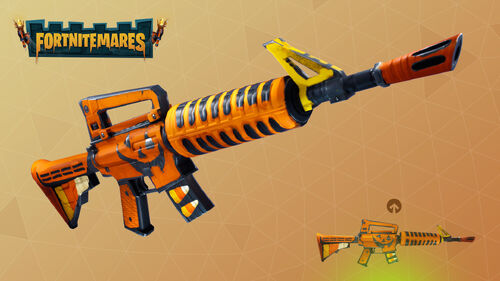 Don't let that smiling jack-o-lantern face on it fool you; the Grave Digger is a powerful assault rifle that will treat the husk to nothing but destruction! Grave Digger fires medium ammo, gaining damage and impact at the cost of accuracy and fire rate. 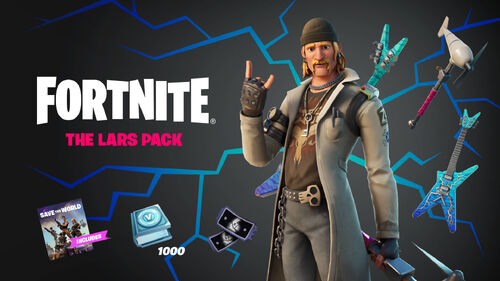 May Hexslyvania treat you well, Commanders!