Fortnite Wiki
Register
Don't have an account?
Sign In
Advertisement
in: Imagined Order, SHADOW, Story and Lore,
and 2 more
English

GHOST (formerly known as E.G.O.) is a spy and military organization in Fortnite: Battle Royale, first appearing in Chapter 2: Season 1. E.G.O. used to have multiple bases scattered across the map, each with a different purpose. It then evolved into an Espionage agency which collapsed at the end of it's season and continue to battle against SHADOW.

GHOST is the counterpart to SHADOW, sporting a lighter coloring scheme rather than SHADOW's dark theme. The first group of E.G.O. members entered The Loop through a Plane that was sent by the Imagined Order. Their mission was to search the reconstructed map and set up base. They investigated the Loopers while the IO worked secretly to reconstruct the Bridge.

Midas is the only known E.G.O leader, the identity of the founder (if not Midas) is also unknown. Since Chapter 2: Season 4, they haven't been active like SHADOW. They lost the Spy Wars, as SHADOW took over their bases and most of the neutral agents joined SHADOW with Skye and Deadpool being the only ones that joined GHOST during Chapter 2: Season 2. In Season 3, GHOST rebelled against SHADOW’s reign, with no clear winner at the end of the season. 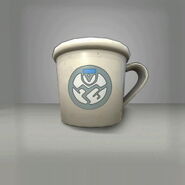 The Agency picture in IO base