Geno is the leader of the Imagined Order first mentioned by Agent Jones in The Zero Crisis Finale. He is referred to as the big boss by Jones. He is the overarching antagonist of Battle Royale.

Geno is stated to be the founder of The Imagined Order, above Doctor Slone. It is learned that Geno is feared by The Seven, as stated by their leader, The Foundation. The Zero Point is stated to be in the hands of Geno. The Foundation was willing to work together with Agent Jones after Jones promised to bring The Foundation to Geno. It's also inferred that Jones has knowledge about Geno, however as implied in Zero War, Jones has no idea who Geno is, easily mistaking Gunnar for him. Geno also seems to have access to The Omniverse without using the Zero Point directly. 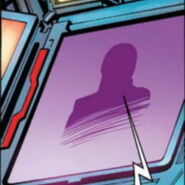