Ghoul Trooper is an Epic Outfit in Fortnite: Battle Royale, that can be purchased in the Item Shop for 1,500 V-Bucks. She was released in Season 1. 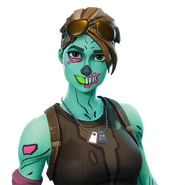 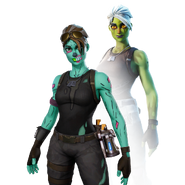 Promo with Brainiac in the News Tab

Fortnitemares 2021 Promo with Brainiac in the News Tab
Deutsch Français
Community content is available under CC-BY-SA unless otherwise noted.
Advertisement