Fortnite Wiki
Register
Don't have an account?
Sign In
Advertisement
in: The Last Reality, Story and Lore, Cubes

Operation: Sky Fire (barely seen in the Cube Chamber in The Mothership)

Golden Cube was the most powerful Cube in the Cube Legion, one of The Cube Queen's personal cube and Storyline Entity in Fortnite: Battle Royale. The Golden Cube first made its appearance in Chapter 2: Season 7, during the Operation: Sky Fire event.

The Golden Cubes are identical to the Corruption Cubes, albeit golden in color. The Golden Cube acts as a catalyst for Cube reproduction, allowing for more cubes to be spawned in once it "awakens" other Corruption Cubes. During The End event, Cube Queen used the Golden Cube at the top of The Pyramid to gather all corruption cube energy and use them to open a golden rift to the Last Reality.

Floating above the Aftermath

Floating above the Aftermath 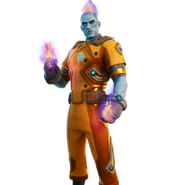