Groot is a Marvel Series Outfit in Fortnite: Battle Royale that can be obtained at Level 38 of the Chapter 2: Season 4 Battle Pass.

Rocket Raccoon's close friend and ally, Groot is from Earth-616 and is a founding member of the Guardians of the Galaxy. Groot is a fictional character appearing in American comic books published by Marvel Comics. Created by Stan Lee, Larry Lieber and Jack Kirby, the character first appeared in Tales to Astonish #13 (November 1959) depicted as extraterrestrial, sentient tree-like creature called Flora colossi or the original Groot first appeared as an invader that intended to capture humans for experimentation. 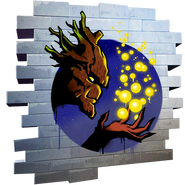 Spray
Add a photo to this gallery
Retrieved from "https://fortnite.fandom.com/wiki/Groot?oldid=175786"
Community content is available under CC-BY-SA unless otherwise noted.