The Hand Cannon is a Pistol in Fortnite: Battle Royale. It was added in Season 3. A similar Mythic weapon is Deadpool's Dual Hand Cannons.

Heavy Bullets. The Hand Cannon has a Headshot Multiplier of 2.0x.

The Hand Cannon is a hitscan weapon, with First Shot Accuracy enabled.

From when the weapon was last available in Chapter 2: Season 7

Combining a Hand Cannon with:

The Rare version of this weapon is available in the Team Brawl and Spy Games LTMs. 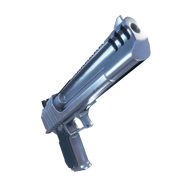 The Hand Cannon's Icon prior to Chapter 2: Season 3