JB Chimpanski is an Epic Outfit in Fortnite: Battle Royale, that could be obtained by purchasing all of the cosmetics on Page 7, and spending

9 Battle Stars of the Chapter 2: Season 8 Battle Pass. He is part of the Astronaut P-14 set.

J.B. Chimpanski was found as a Character at the Weather Station during Chapter 2: Season 8.

If we all chimp in, we'll do this thing!

Proceeds go to the war effort.

I want YOU to contribute to the fight against six-sided tyranny!

Whoa. Hey, tallchimp, the donation boxes are right over there!

...You had to know I'd find your outfit extremely offensive.
Wearing Monks

You wanna get those towers built, yer gonna have to chimp in.

This might just be my primate instincts speaking here, but I don't trust unvaultingthose lil' rift makers.

Been monkeyin' around in the workshop but I can't decide what to prioritize first.

Been monkeyin' around in the workshop but I can't decide what to prioritize first.

Unvault this if you're feelin' funky, who am I to harsh your boogie?

If we wanna be top banana in this war, I suggest investin' in some mechanical muscle.

Unvaulting this will help keep your friends close and your bananenemies closer. 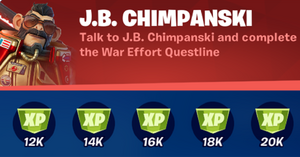 You! Tallchimp! Have you helped the war effort today?
Remember: If we all chimp in, we'll do this thing!
Make Donations to a War Effort Donation Box

We need compact cars for some low-profile surveillance.
I'd get it myself, but the thumbs on my feet keep getting in the way?
Deliver a car to the Weather Station

Alien metal is the perfect alloy for crafting combat supplies.
It's irradiated, but hey! Space radiation worked wonders for me!
Harvest metal from an Alien Crash Site

I need you to rally the troops. Boost morale. Grind the ol' organ for 'em.
How are they feeling? Should I have sent you out there with cymbals?
Talk to Characters

Whaddya think, Tallchimp? Ready to try one of the big weapons?
Say it with me: If we all chimp in, we'll do this thing!
Interact with a Mounted Turret