Jennifer Walters is a Marvel Series Outfit in Fortnite: Battle Royale that can be obtained at Level 22 of the Chapter 2: Season 4 Battle Pass.

Jennifer Walters is a lawyer/superhuman from Earth-616, that is similar to the Incredible Hulk in many ways. She received her powers after she was shot and required a blood transfusion. Her cousin, Bruce Banner, gave her a blood transfusion that turned her into She-Hulk. Similar to the Hulk, she has superhuman strength. Unlike him, she keeps her consciousness after turning into She-Hulk, and has even been seen in the court in her She-Hulk form. 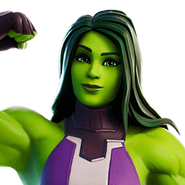 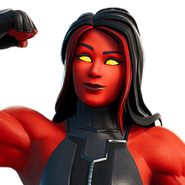 Red She-Hulk
Add a photo to this gallery
Retrieved from "https://fortnite.fandom.com/wiki/Jennifer_Walters?oldid=175792"
Community content is available under CC-BY-SA unless otherwise noted.