John Wick is a Legendary Outfit in Fortnite: Battle Royale, that can be purchased in the Item Shop bundled with the Assassin Pack Back Bling for

2,000 V-Bucks. John Wick was first released in Season 9 and is part of the John Wick Set in collaboration with the 2019 film John Wick: Chapter 3 - Parabellum. 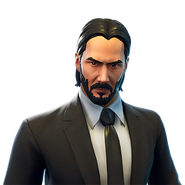