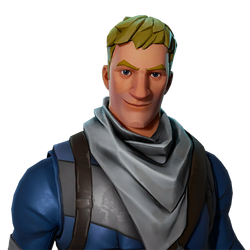 Jonesy is a character in Fortnite: Save the World that represents the Soldier class. He is also used for one of the randomized, default avatars in Battle Royale. His model is used in the following Soldier subclasses:

Retrieved from "https://fortnite.fandom.com/wiki/Jonesy?oldid=45754"
Community content is available under CC-BY-SA unless otherwise noted.