Jules is an Epic Outfit that could be obtained at level 40 of the Chapter 2: Season 3 Battle Pass.

Jules wears a stern expression. She is dressed in a white, tight crop top featuring the A.L.T.E.R symbol and jeans. She has leather shoes, knee pads and has braided hair. She wears thick gloves and has multiple bags and a rag connecting to her belt most likely containing engineering material. Her arms, neck, and torso is covered with tattoos featuring different sized gears, bars, and other engineering gadgets. Her hair is braided into two strings and she wears a pair of goggles and wields dual wrenches. Her ears and nose are pierced and decorated with golden jewelry.

Jules dropped the following items when eliminated at The Authority: 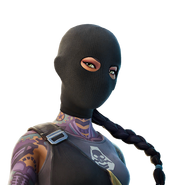 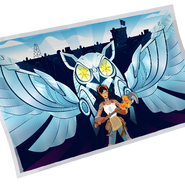 Get Fixed Loading Screen, Featuring Jules, Ohm, and The Authority
Add a photo to this gallery
Retrieved from "https://fortnite.fandom.com/wiki/Jules?oldid=183402"
Community content is available under CC-BY-SA unless otherwise noted.