Junk Junction is a removed Location in Fortnite: Battle Royale.

It was located in the North-West of the map, North of Haunted Hills and North-West of Pleasant Park. It consists of a junkyard, with destroyed cars, scrap metal with 2 buildings - one large, two-storey building and one smaller building. On the hill behind it, there was a large metal Llama, with a couple of chests in.

This location was originally added in Season 2, along with other locations such as Haunted Hills. In Season 3, a Vending Machine was added. During Season 7, it was covered in snow for Christmas Day, and in Season 8 a Reboot Van was also added. In Season 9, the Clocktower from Tilted Towers appeared in it, after it was destroyed in the Volcano Eruption in Season 8. A birthday cake was also added in the middle of Junk Junction for Fortnite's Second Birthday. Finally, it was sucked into the Black Hole during The End Event. 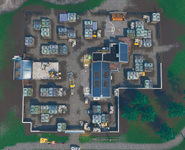