watch 02:45
Wiki Targeted (Games)
Do you like this video?
Play Sound

14
Lonely Lodge was a location situated in the easternmost region of the Athena island.

The area consists of a forest that is crossed by a river, and houses a large wooden lodge along with several smaller houses and sheds scattered around the woods. It also has a high lookout tower. South of the forest lied the Hero Mansion. It is distantly east of Retail Row and directly south of Sunny Steps. It was located inside the coordinates I4, I5, J4 and J5.

The lodge is a large, two-story wooden building that is situated at the northernmost limit of Lonely Lodge. While some loot can be found laying on the first floor, a couple of stairs lead to the second floor, where more can be found.

The lookout tower is situated in the southern half of the location, and allows to overlook the whole woods as well as the seaside mansion.

The Hero Mansion, situated at the very south of the location, is circled by a garden. On the top floor of the house is a gym. The lair also has a direct access to the outside, facing the sea. In Season 6 it became abandoned. In Season 7 an X4-Stormiwng plane could be accessed there.

It was first added back in Season 1, along with other locations such as Pleasant Park. In Season 3, a Vending Machine was also added there. In Season 4, at the end of the season, a rift replaced the "Welcome to the Lodge" sign. In Season 6, the top of the sniper tower was covered in chicken legs and feathers. This was probably a teaser for the Tender Defender Outfit. For Fortnitemares that season, a bed in the main lodge was floating. It was covered in snow and had Season 7 were added in Season 7. A Reboot Van was added in Season 8 and it was sucked into the Black Hole in Season X. It did not pass over to the Apollo Map. 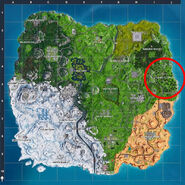 Mansion Close-Up
Add a photo to this gallery
Retrieved from "https://fortnite.fandom.com/wiki/Lonely_Lodge?oldid=176036"
Community content is available under CC-BY-SA unless otherwise noted.