Longshot is a Rare Outfit for Fortnite: Battle Royale that can be purchased from the Item Shop for 1,200 V-Bucks. Longshot was first released in Season 6. He is part of the Ranged Recon Set. As of Update v15.00, he is also a Character that resides in Misty Meadows, giving quests, bounties, and a sniper rifle if you duel and kill him. He does not offer upgrades, however. 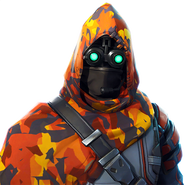