Tier 1 of the Season 7 Battle Pass

Lynx is a Legendary Outfit in Fortnite: Battle Royale, that could be unlocked at Tier 1 of the Season 7 Battle Pass. She is part of the Lynx Set. 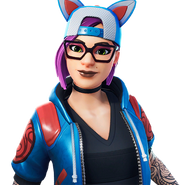 Season 7
Lynx is a GHOST and Expedition member. She was stationed at Frosty Flights and is tracked by the Imagined Order, alongside Jules and Midas, showing she could have a connection to them.

She was seen working for the Expedition and is stationed at Frosty Flights.

She is one of the agents that Midas calls in the Story Trailer. She is fighting a group of Sledges until she comes to The Agency. She also seems to be in a friendship with Meowscles.

She was seen with Jonesy, Raven, Peely, Brite Bomber, and Kit in a battle with Thor and his Avengers allies.

Lynx would later form a group of loopers with CRZ-8 and P33LY, possessing futuristic gear.